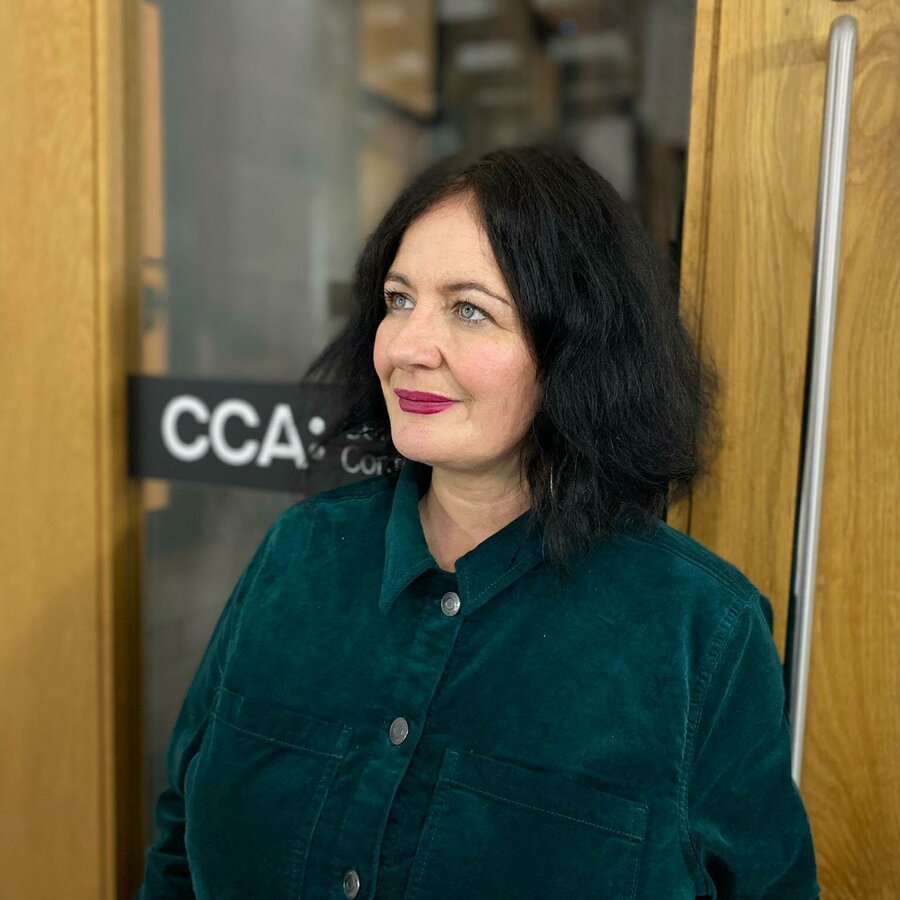 Jean Cameron is an internationally respected freelance cultural leader, producer and facilitator based in Glasgow. She has enjoyed a thirty-year professional relationship with CCA, which began in 1993 when she worked on the opening public performance of the new organisation, managing the front-of-house team. During her role as a producer of Glasgow International, she was based in CCA and worked with Francis McKee on the delivery of the festival. Most recently, in 2021, she produced a series of events entitled Feminist Exchanges for Climate Justice at CCA for the Feminist Exchange Network during COP26.

She is currently the Executive Producer for the Edinburgh International Cultural Summit, a role that builds on her track record of delivering significant cultural relations programmes with partners including the Ukrainian Institute, the British Embassy Rome and British Council. She is a Trustee of National Theatre of Scotland, where she has an active role as the Sustainability advocate on the Board and is a member of the Risk and Audit Committee.

In the late ‘90s, she was a cultural tenant at CCA whilst working for New Moves International, from which she moved into a role as Dance and Performance Programmer at CCA, at a time when CCA was operating from the McLellan Galleries. She has helped shape the Scottish cultural calendar through her work on the likes of the Glasgow 2014 Commonwealth Games Cultural Programme and as Producer for Scotland’s presentation at the Venice Biennale. As Project Director for Paisley 2021, she led her hometown’s bid in the UK City of Culture competition. 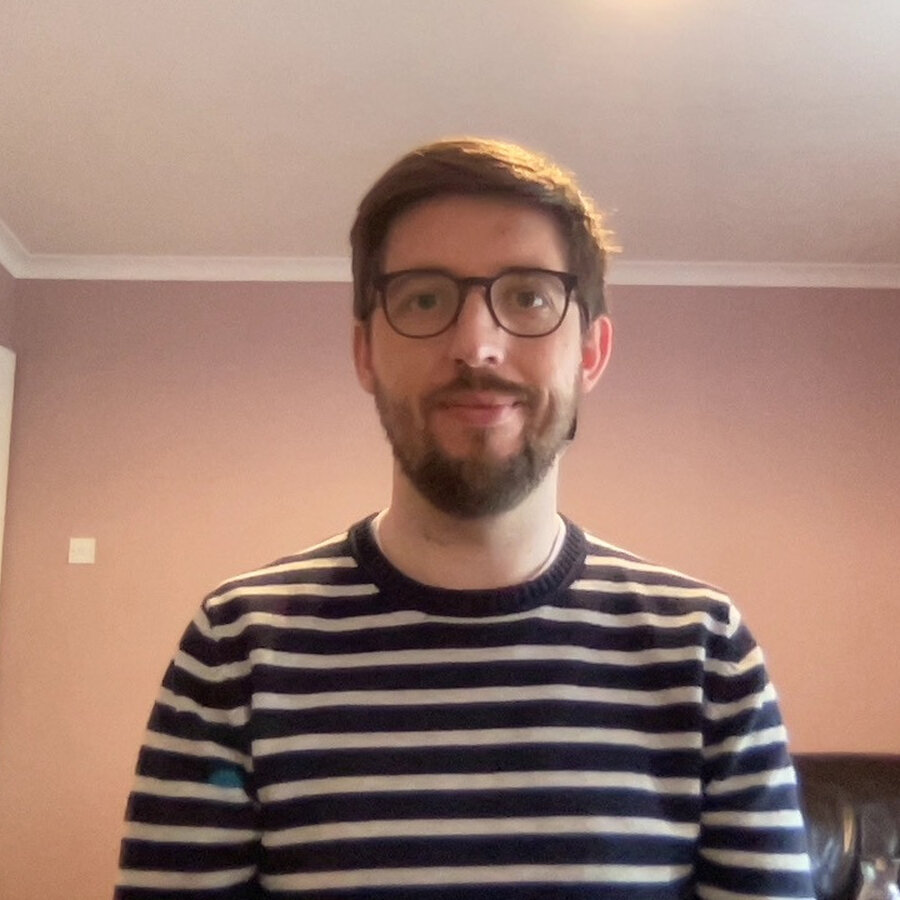 Andrew works within financial control and management accounting. He started his career in banking operations before gaining an accountancy degree with distinction from Glasgow Caledonian University. He is an ACCA qualified accountant and has worked across a wide range of sectors including banking, transport and criminal justice.

He brings experience of financial control, technical accounting, financial strategy and governance to his role on the CCA board. Andrew has a keen interest in contemporary art, music, film and making the arts accessible for all. 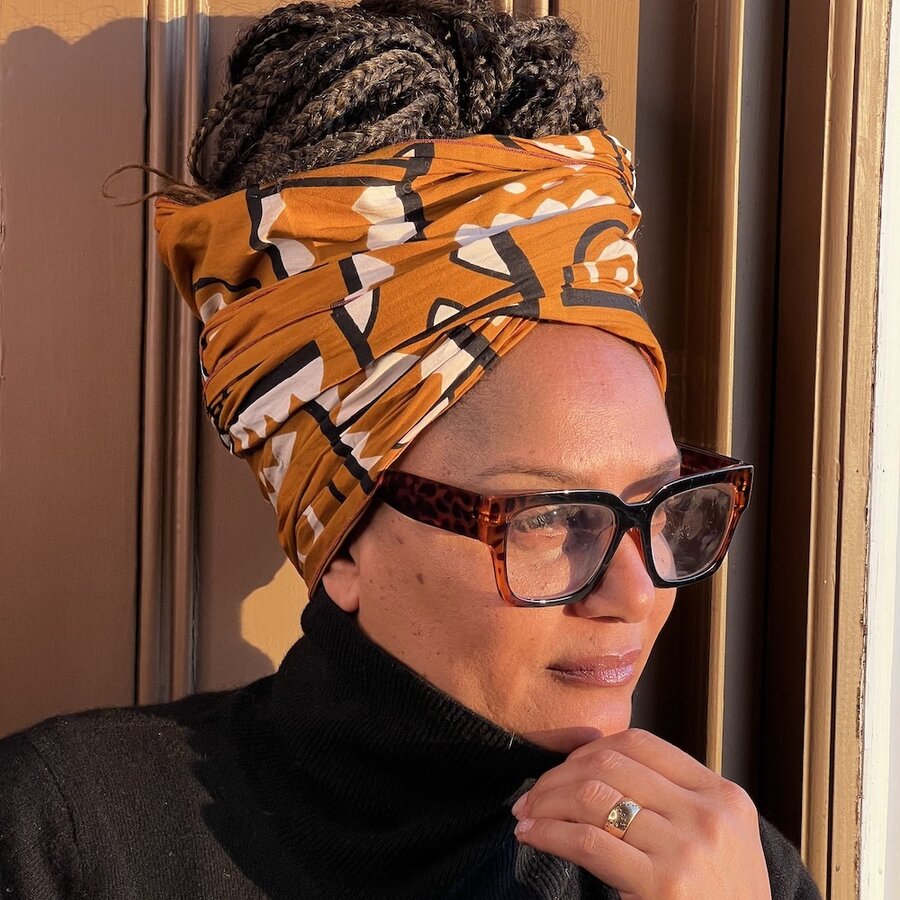 Ima is a community engaged researcher working broadly within migration and those who are adversly racialised within society. Over the last 20 years, as unprecedented migration has changed Scotland’s demography, her work has built from the experiences of those who are often marginalised and racialised within our systems of policy development and service provision. Her work is based in social justice and disrupts the authority and integrity of the Academy to support communities and evidence their experiences through research to those that make decisions about them.

Within the broad framework of anti-racist practice she works in a pragmatic way across health, education, the cultural sector and skills and employability. Her work informs policy and service provision both nationally and internationally. She is currently: Chair of the Board for CCA and has been on the CCA Board since 2014. She is also Co-chair of the First Minister’s Advisory Council on Women and Girls and Co-chair of the Scottish Migrant Health Research Strategy Group (SMEHRS). 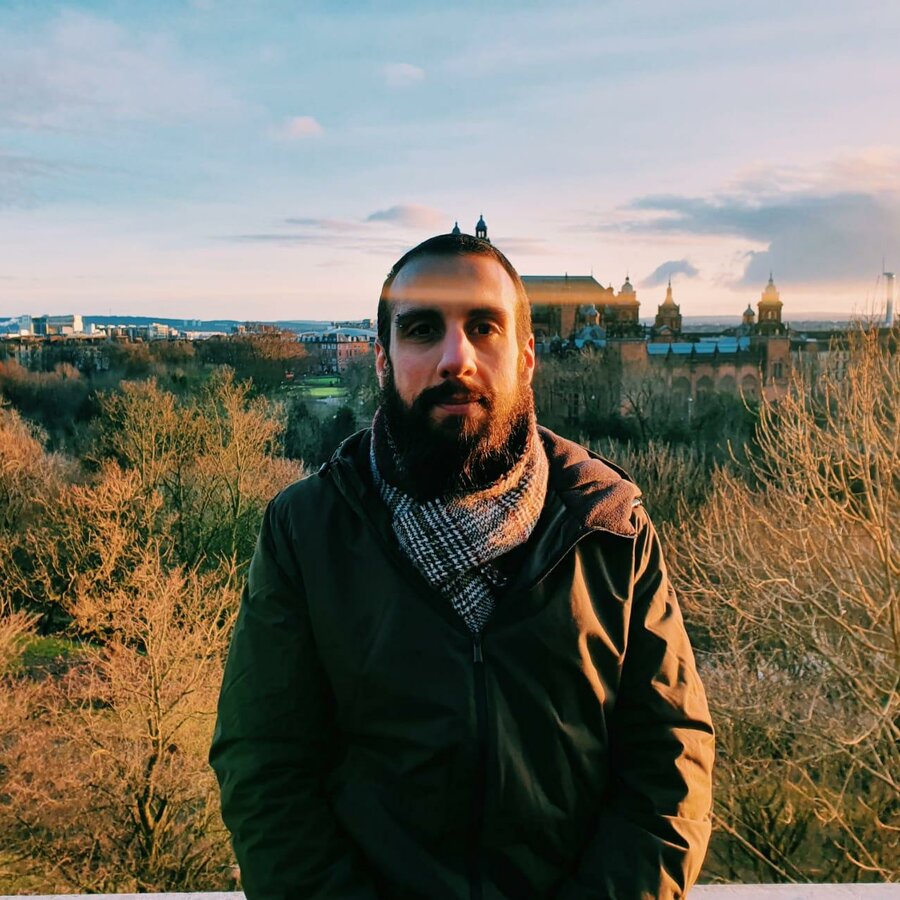 Faris is a digital communication expert with over six years of experience working in digital marketing. He is the co-Founder of Breathing Digital, a digital media agency based in Scotland. He also works as Digital Officer at Scottish Refugee Council where he is responsible for New Scots Connect, a Scotland-wide network of local communities, groups, and organisations set up to enhance the welcoming environment for refugees and asylum seekers.

After graduating with BA Business Management with Commercial Music Production from the University of Chester, he spent five years in the humanitarian-development sector, working in communications and marketing departments of different NGOs. Faris is also a music producer and composer, he specialises in composing and producing music for visuals. 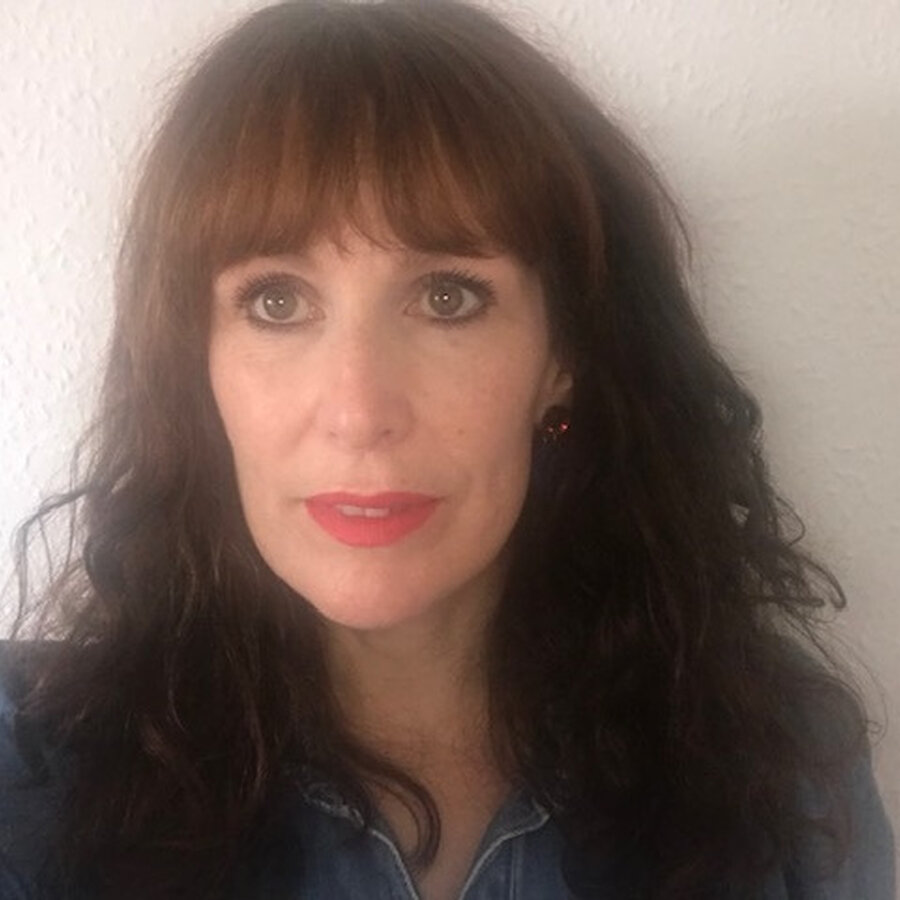 Lesley serves as the General Manager of Glasgow’s Citizens Theatre and has been with the Company for the past nineteen years. She has more than 30 years’ experience in theatre, hospitality and the operations industry and has held senior management positions with the Citizens Theatre for the past ten years, responsible for the day to day running of the Company and its operations.

Lesley is also responsible for project management and programme delivery, overseeing the production management of all events. She ensures the smooth delivery of the artistic programme alongside a programme of external hires. Lesley is the lead for insurance and licensing, Health and Safety and environment sustainability. Lesley started her theatrical career as an actress and was one of the founding members of the Arches Theatre Company. 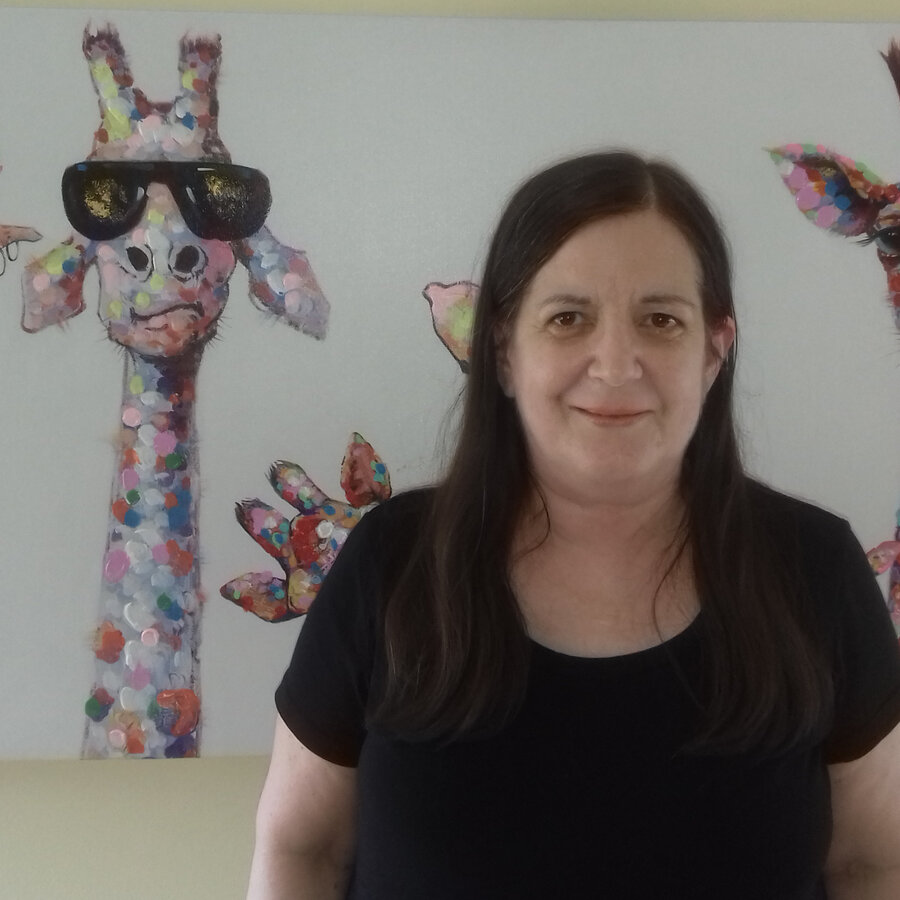 Alison is an environmental and sustainability consultant, who started out working in conservation, ecology and regeneration. She has since worked with a range of organisations in the public, consultancy and third sectors, business and industry (urban infrastructure, rural, coastal, agriculture), local authorities, statutory conservation bodies, and academia.

A continuous thread throughout her work has been community based, focusing on community capacity, with recent projects in: voluntary arts, wellbeing, culture and tourism, food resilience, and establishing community hubs. She has over twenty-seven years‘ of environmental sector experience and brings this to her role on the CCA board. Alison has a keen interest in contemporary art, music, dance, poetry, storytelling, film and theatre. 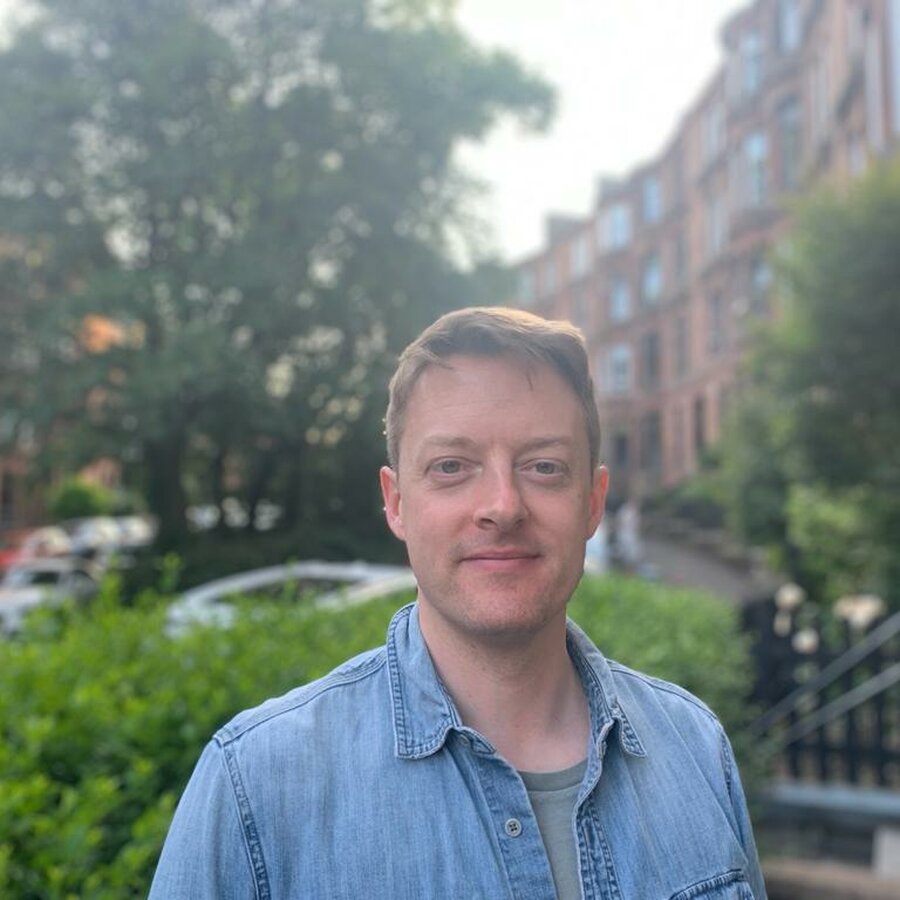 Martin is a solicitor at Morton Fraser. Over the past few years, he has developed a specialism in crofting law, acting for a diverse range of clients across the Highlands and Islands and beyond in a variety of crofting and rural property matters.

Before qualifying as a solicitor, Martin worked in the visual art sector, gaining experience in roles across exhibitions, press, marketing and public engagement. He was the co-founder of Sierra Metro, an artist-led exhibition space in Granton, Edinburgh. Martin is a graduate of the Fine Art Photography programme at the Glasgow School of Art. 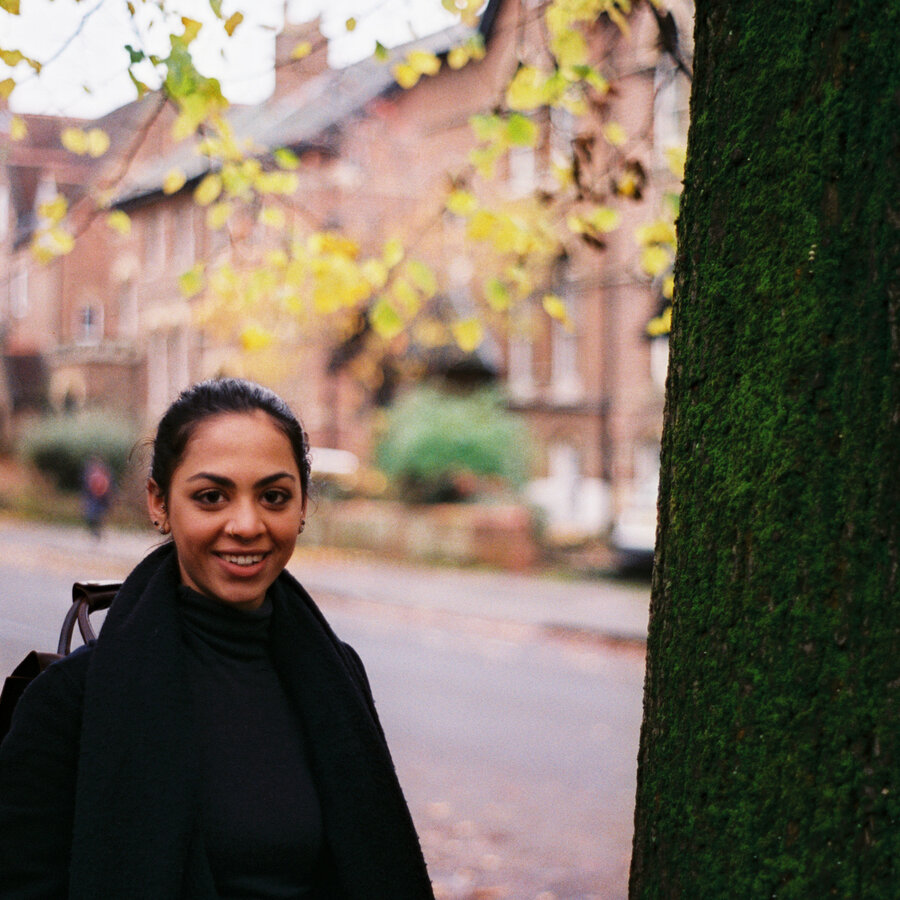 Aayushi is a practising artist with a particular interest in critical writing on photography. Both her works and research are primarily interdisciplinary between photography, literature and philosophy.

Her key concerns are understanding the evolution of various forms that media-based technologies have led to since their introduction to society; and further speculating what the future of photography will be, now that the digital image and Web 2.0 are overpowering various photographic practices.