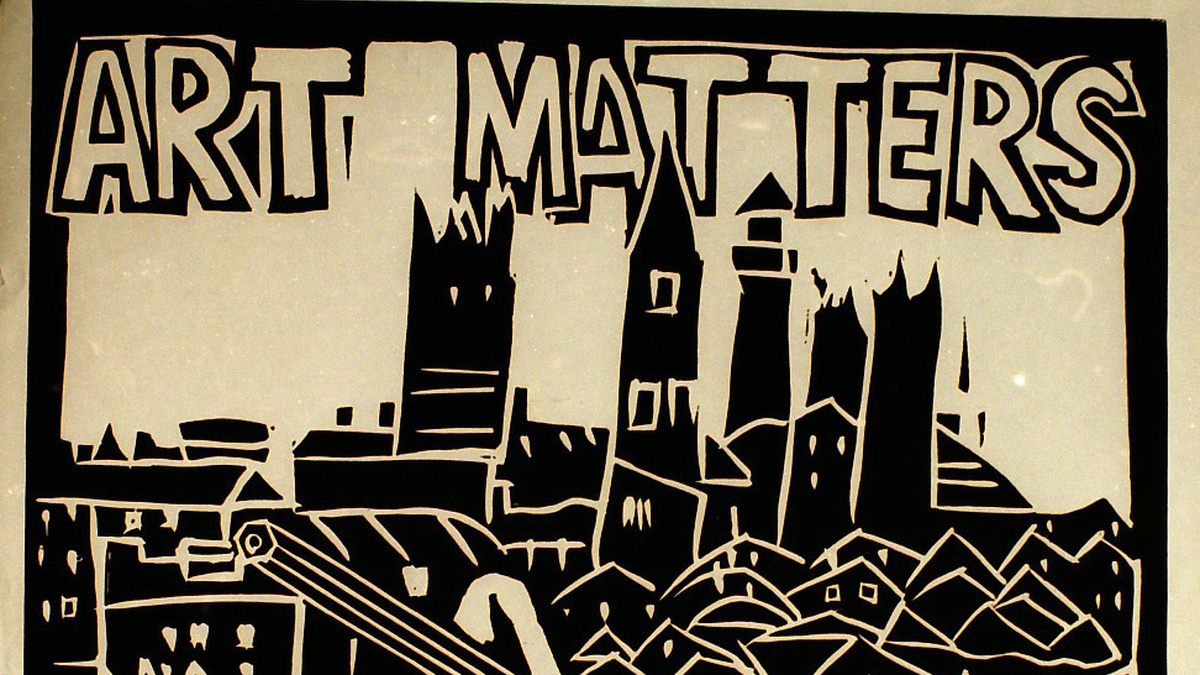 Since we started work on the archive in CCA we have begun to piece together a timeline of arts activity that began in the early seventies in the area around Garnethill and the Art School.

We know more now about the Scottish Arts Council Gallery in Blythswood Square that housed Tom McGrath’s first arts programmes from 1973–75 before he acquired the present site on Sauchiehall Street for the Third Eye Centre. That activity and the first five years in the Third Eye are enriched by the video material that McGrath, Ian Black, Tom Busby and Jak Milroy filmed: their tendency to test the camera on their family and friends only adds to the insights into that period in Glasgow. 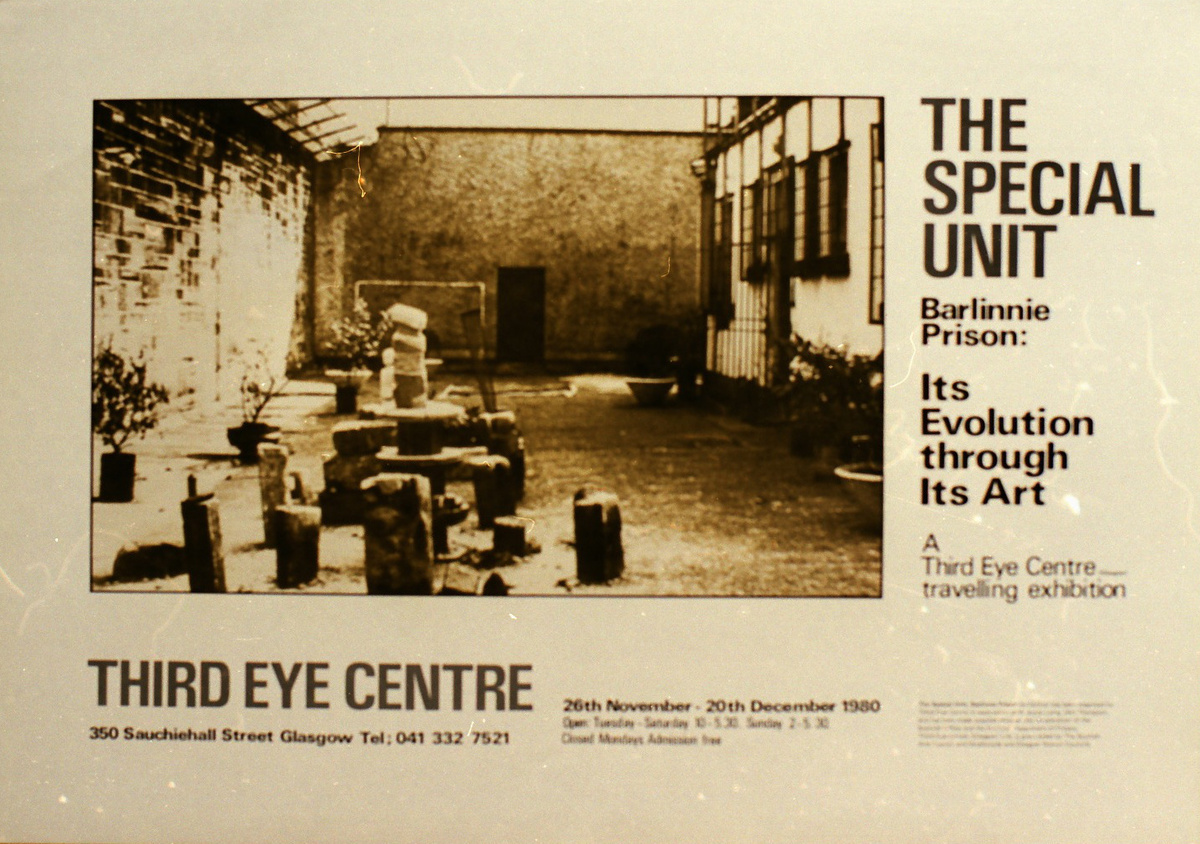 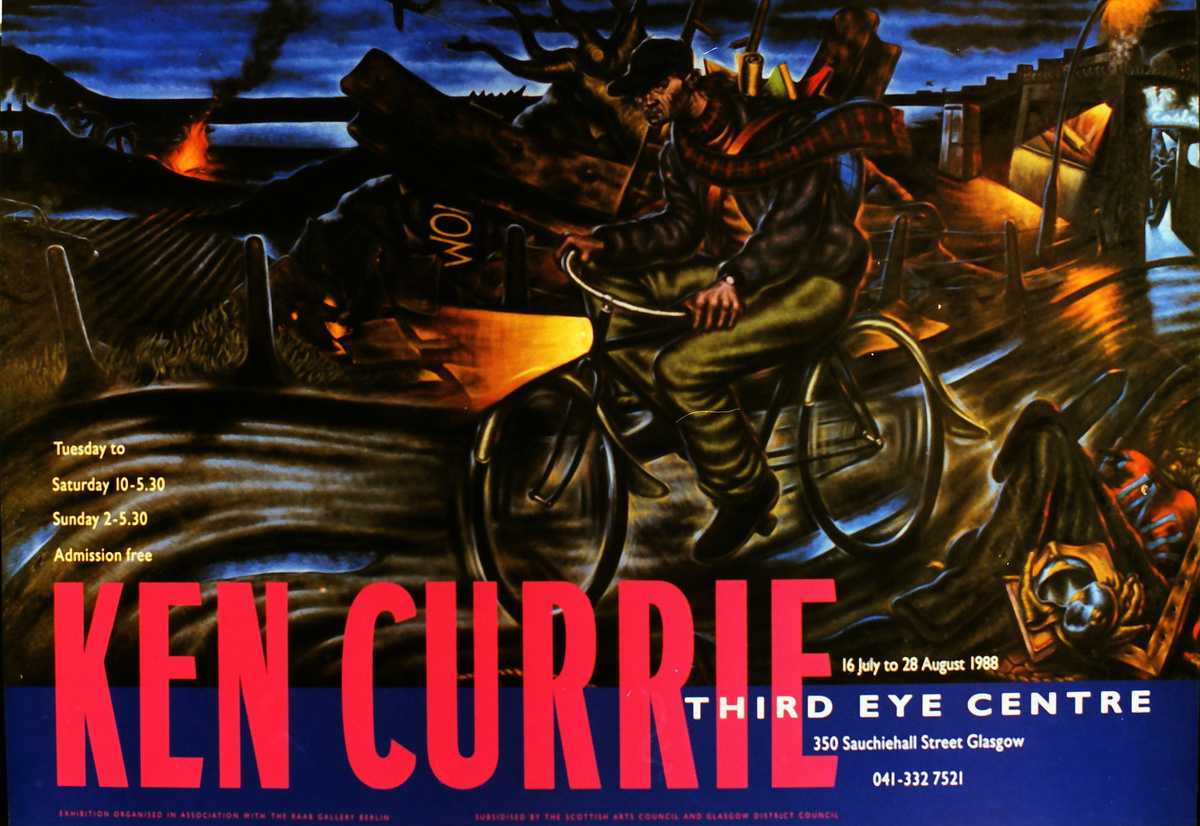 Equally, the camera was available to members of the public and this adds another element of randomness to the remaining stock of films. There is, for instance, a film of 12 July marches; a gospel meeting in Glasgow Green; a wedding in Drumchapel; and children from Belfast on a ‘break’ from the Troubles. A significant number of films are also devoted to documenting the sweeping changes to Glasgow’s landscape in the 1970s.

Besides the video material there are valuable documentary records of the beginnings of the art centre, offering clues to Tom McGrath’s vision for the organisation which seems very much rooted in community arts and an openness to all definitions of culture in Glasgow. The carbon copies of his letters, the early board minutes, and all sorts of ephemera give us a real insight into the workings of arts infrastructure at that time.

Remarkably, the Third Eye Centre only had two directors: Chris Carrell took over from McGrath in the late 1970s and led it until 1991, maintaining the wide remit established by his predecessor. Exhibitions on classic photographers such as Walker Evans and Robert Frank were interspersed with shows on Hengler’s Circus, Scottish Football (attracting 30,000 visitors), space travel, Paisley shawls, and Spitting Image puppets. In the 1980s the Third Eye Centre played an important role in the rise of Scottish figurative painters such as Ken Currie and Stephen Campbell and there were also key shows by artists such as Sam Ainsley, Jacki Parry, Roger Palmer, Susan Hiller, Pavel Büchler, Damien Hirst and Sophie Calle. 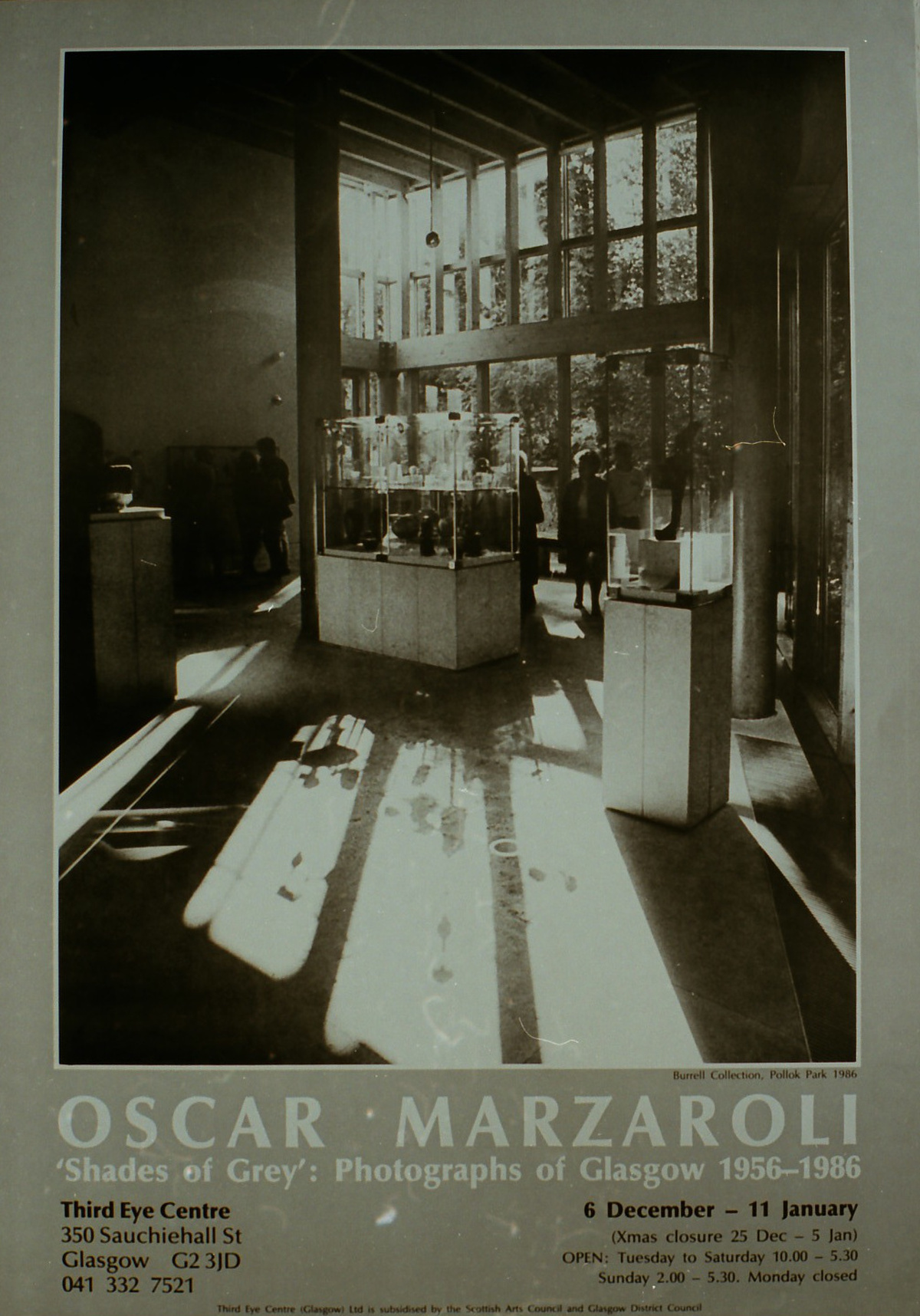 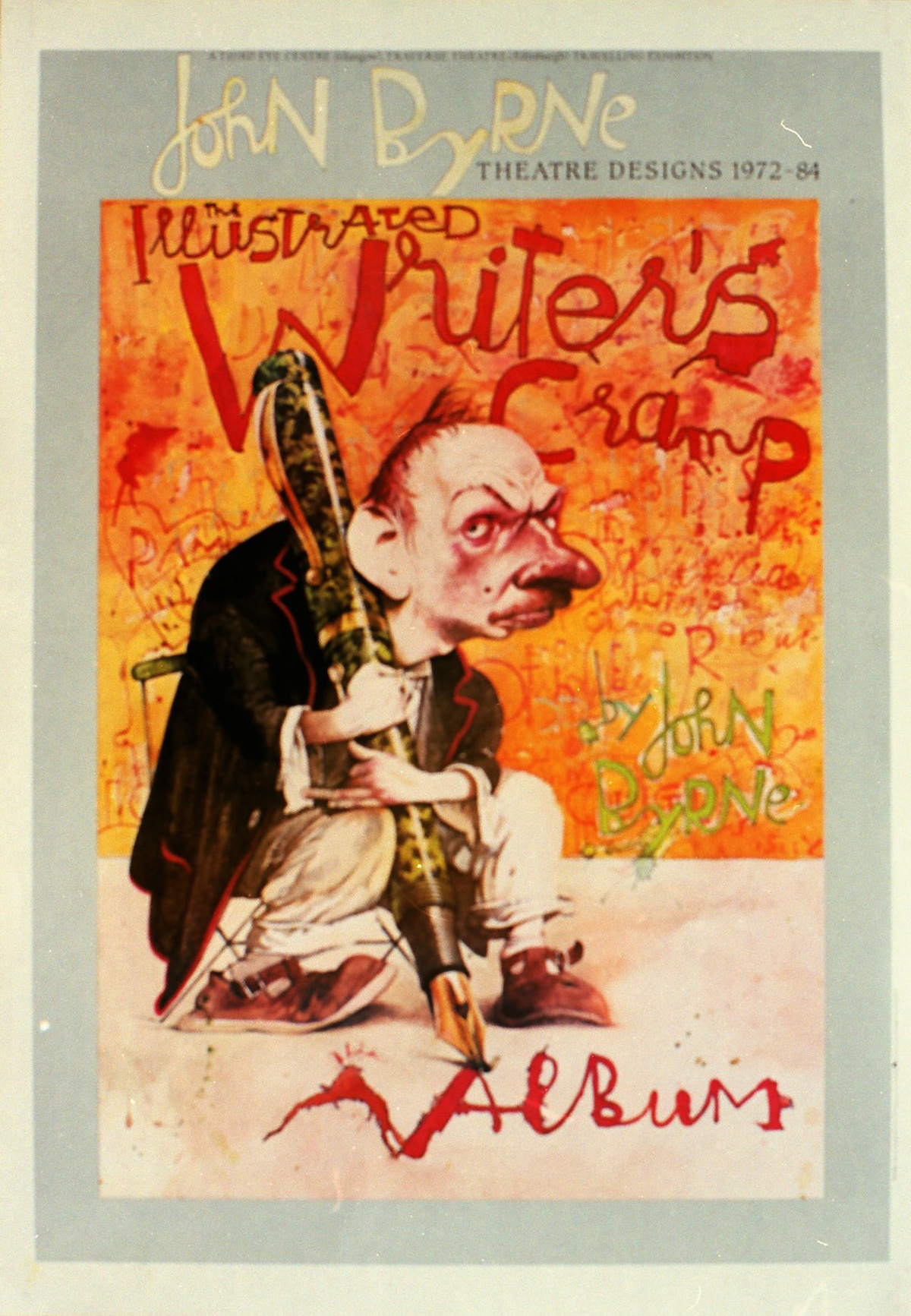 Craft exhibitions were a consistent element of the programme too and there appear to have been café exhibitions (it’s still hard for us to track down documentation for these or to list them). Towards the end of the 1980s there were a series of exhibitions that presented art and artists from Eastern Europe and Poland, perhaps reflecting the stirrings of perestroika. Chris Carrell’s era also sees the arrival of New Moves and the National Review of Live Art, vital festivals for the development of experimental performance in the city.

Oddly, though, this decade is lacking in video or audio documentation – a strange fact given that the camcorder becomes so popular and also because several albums were recorded in the Third Eye, most notably Mbizo by the South African jazz musician Johnny Dyani in 1981 and Ivor Cutler’s Life in a Scotch Sitting Room Vol. II in 1978.

Recording resumes in the 1990s when CCA begins to document events, particularly live art performances and workshops but that recording gap illustrates the nature of archives. While much great material is preserved, an archive also makes us aware of what is missing. In the case of the Third Eye Centre, what remains absent, beyond recordings, are the memories of the staff, the artists and the audiences: first-hand accounts of the spirit of the place. To counter this we have begun to record a series of audio interviews with participants in the Third Eye (if you would like to be a part of this please contact archive@cca-glasgow.com).

All archives have blind spots and the Third Eye/CCA archive is no exception. Working on the history of events, audiences and staff who inhabited the building, inevitably draws us back to the long history of the building before its refurbishment and relaunch in 2001. Events since then have also been recorded and archived and yet, it’s only recently that we have begun to recognise the implications of the expansion of the building that took place at the turn of the century. The early 19th Century villa that now houses our performance space was a separate building throughout the history of the Third Eye Centre and the early years of CCA. In the 1960s, it was a nightclub called the Maryland and hosted stars such as Champion Jack Dupree, John Mayall, Mississippi Fred McDowell, Arthur Crudup, Muddy Waters (on crutches), the Who (possibly) and T-Rex. Later it was Maestros and The Cotton Club. The archive has nothing on this and it remains a question whether it should be incorporated into the Third Eye/CCA collections: but it’s another fascinating element of that counter-cultural influence that played a role in this part of the city.