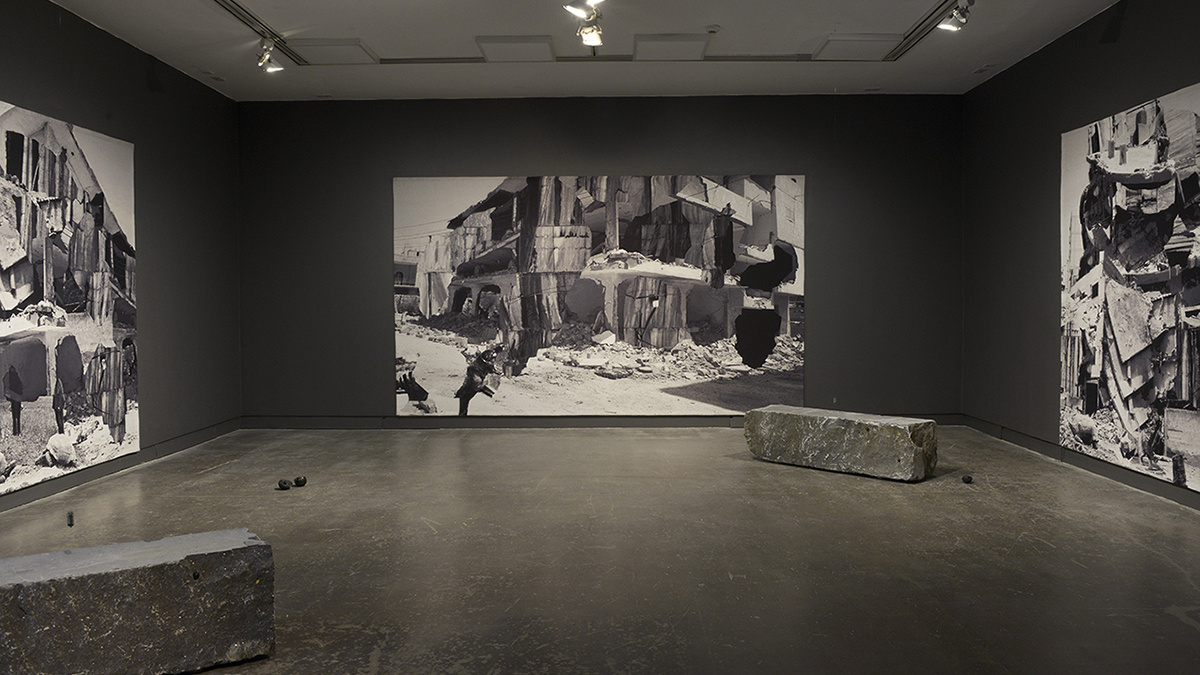 An Experiment With Time by Ailbhe Ní Bhriain, photo by Alan Dimmick.

CCA has remained open since late April 2021, marking 2021-22 as the first year of uninterrupted operation since the beginning of the pandemic crisis. However, this continuity did not necessarily signal cohesion, regularity or indeed normalcy. Rather, 2021-22 has been a year of re-adjustment, of learning to work with the unpredictability of the crises that face both the arts and the world more generally. As such, this re-adjustment has yielded time to reflect and adjust, as well as to experiment with new practices and projects.

Any intentions of a slow and measured return to full capacity were uprooted by the arrival of COP26. Glasgow played host city to the 26th UN Climate Change Conference of the Parties (COP26) in November, which saw a sudden influx of visitors to the building (12,904 visitors over the fortnight, almost doubling the previous weeks’ count). CCA’s programme turned its attention to climate justice, with an exhibition that brought together three perspectives on climate change from different regions of the world, as well as an open-source programme that hosted events from local partners such as Scottish Youth Theatre and Feminist Exchange Network, as well as welcomed new international partners such as COP26Coalition and If Not Us Then Who?. The programme of performances, screenings and talks concerned with the climate crisis was an art-focused, citizen-led complement to the discussions heard throughout the city during this time.

This period demonstrated the importance of maintaining existing partnerships whilst also forming new ones, a particular challenge to our open-source programme during the pandemic. This challenge reiterated the interconnected nature of the cultural sphere that we operate in: we discovered that as a central organisation, we are but one of the many recovering from crisis, as evidenced by the backlogs to be tackled and the exhaustion to be overcome by our partners. However, interconnection also fostered a renewed sense of reciprocity and solidarity, and we’ve been thrilled to support and facilitate some of our partners’ first in-person events in years: a sold-out Scottish Queer International Film Festival, a bold and exciting Glasgow Short Film Festival and multiple one-off events from regular partners such as Ceòl is Craic, CinemaAttic and Take One Action. We’ve also formed novel connections: working with the Scottish Neurodiverse Performance Network to launch a new neurodivergent-led platform and festival; establishing long-term community projects with the likes of Glasgow Small Trans Library, Maryhill Integration Network and Sound Lab; and hosting featured events with the likes of TAPE Collective and School of Abolition.

Re-adjustment has inspired engagement with alternative spaces, and this year has seen the fruition of a project designed to engage with the digital realm. CCA Annex launched in April 2021, serving as the digital wing of CCA’s programme. CCA Annex is an online project space that offers an alternative means of working with artists, writers, activists and other practitioners. Its online nature not only allows work made in Glasgow and Scotland to be more readily accessible to international audiences but also acts as an archive or extension of the exhibitions curated within our physical gallery space. Over the past year, CCA Annex has hosted live events in collaboration with the likes of Arika, the Goethe-Institut and the Glasgow Seed Library, as well as presented curated film programmes, published essays and hosted games. In December, CCA Annex issued a call for proposals for research-based, process-led projects that critically engage with digital modes of presentation, and are now working directly with artists Sean Wai Keung, Lauren La Rose, Joey Simons and artist-led press Rosie’s Disobedient Press to develop these projects.

Another project that has blossomed both online and outdoors is Glasgow Seed Library. Aiming to support local growers to build climate, food and community resilience, the project distributed seeds to people and communities around Glasgow, hosted regular digital talks and seminars, organised in-person workshops with guest practitioners, and established growing beds at Lambhill Stables Community Garden. During COP26, Glasgow Seed Library contributed to citywide climate activism with seed-saving workshops, talks and events. New initiatives for 2021 include Germinate!, a peer support group of seed librarians, curators and organisers across Scotland, and Field Days, a year-long participatory project open to all, supporting skills in growing, nurturing and nourishing crops for organic seed production. In the new year, Glasgow Seed Library also welcomed Désirée Coral as their first Artist and Researcher in Residence, a position funded by the Scottish Graduate School for Arts & Humanities.

As Spring approached, CCA hosted its first in-person exhibition opening of the year, concluding a year of curation of local and international contemporary art within the gallery space. In May, we opened the delayed exhibition ambi by Rabiya Choudhry, Fiona Jardine and Raisa Kabir. The title of the exhibition is Punjabi for the pattern known in Scotland as Paisley, and also means ‘both,’ allowing for multiple narratives and interpretations. Soot Breath / Corpus Infinitum by Denise Ferreira da Silva & Arjuna Neuman opened in summer, exhibiting a film dedicated to tenderness. Dampbusters by Winnie Herbstein followed, the third in a triptych of films exploring the past, present and future of community organising in Glasgow. Christian Noelle Charles’ first solo exhibition REFLECTIVE JESTER: IT’S JUST A FEELING reckoned with the world of dance, music, and visual art, forming an active dialogue about self-expression and perceptions of identity. Our climate-based exhibition The Word for World is Forest displayed video work and photography from organisations Our People Our Climate, If Not Us Then Who? and artist Sophie Reuter. Our final exhibition of the year was An Experiment with Time by Ailbhe Ní Bhriain, which combined film, tapestry, print and installation to challenge and re-imagine conceptions of time.

In the absence of much of the public activity that CCA traditionally hosts, we’ve alternatively been able to offer artists space for research and development; introducing new practices to the building through our open source programme. Our collaborative residency programme with recurrent partner programme /BUZZCUT/ returned once more, with both Gillian Katungi and Purina Alpha, in support of their experimental performance practices and ahead of their online programme. CCA has additionally enjoyed supporting artists Matthew Arthur Williams, Sequoia Barnes, Ada Patterson and Malik Nashad Sharpe by granting long-term and flexible residency time to specifically explore the performative strands in each of their practices, working across the building and the different facilities CCA has to offer.

In a year defined by adaptation, the audiences and communities that CCA reaches and serves were at the forefront of consideration. As this year draws to a close, CCA is gearing up to launch a new project: Common Ground. With generous support from the New Scots Fund and the Paul Hamlyn Foundation, CCA is opening a new space within our building front that aims to connect with refugee and new migrant communities. Common Ground aims to be both a resource and a point of access to our arts programme. This space is deliberately experimental and undefined, as we hope that it will come to be defined through its usage by its citizens.