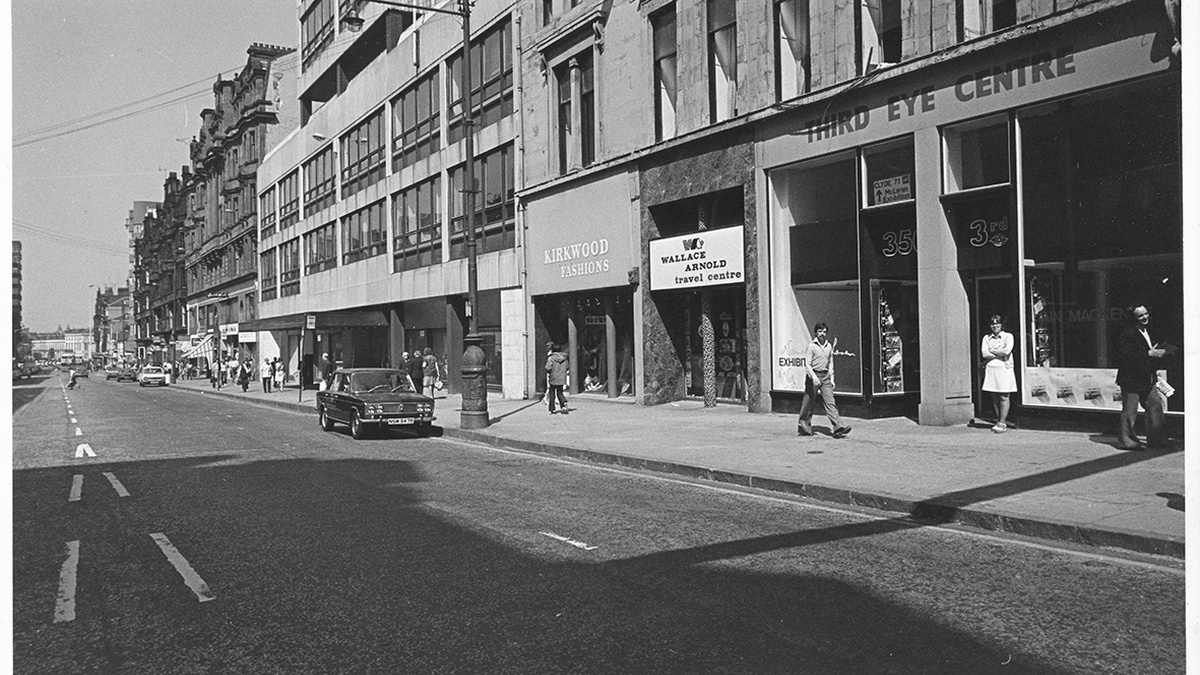 In 1974 Scottish writer and playwright, Tom McGrath, founded The Third Eye Centre in Glasgow. The Third Eye Centre was based in Sauchiehall Street’s Alexander Greek Thomson building from 1975-1991. Allen Ginsberg, Whoopi Goldberg, John Byrne, Billy Connolly, Edwin Morgan and Kathy Acker all performed at the centre. Described by the Guardian as ‘a shrine to the avant garde', the centre quickly became the focus for Glasgow’s counter culture.

The Third Eye Centre only had two directors in its time. Chris Carrell took over in the late 1970s and led it until 1991, maintaining the wide remit established by McGrath. Classic photography exhibitions by Walker Evans and Robert Frank sat alongside shows on Hengler’s Circus, Scottish football (attracting 30,000 visitors), space travel, Paisley shawls, and Spitting Image puppets.

In the 1980s, the Third Eye Centre played an important role in the rise of the new Glasgow painters, Ken Currie, Peter Howson and Steven Campbell. There were also shows by Sam Ainsley, Jacki Parry, Roger Palmer, Susan Hiller, Pavel Büchler, Damien Hirst and Sophie Calle. The Third Eye Centre was also the home of the National Review of Live Art. Several albums were recorded there including Mbizo by Johnny Dyani (1981) and Ivor Cutler’s Life in a Scotch Sitting Room Vol II (1978).

When The Third Eye Centre closed in 1991, the Centre for Contemporary Arts established in its place. The first exhibitions – Narelle Jubelin’s Dead Slow and Tracey Moffatt’s first UK solo show – opened on 1 May 1992, alongside a Mayfest party.

Working across all art forms, CCA continued to be a forum for ideas and events, providing an arts hub for the city.

The venue has had four directors in its history: Jo Beddoe, Penny Rae, Graham MacKenzie and Francis McKee. The 1990s saw a programme bristling with energy and excitement. A challenging live art programme welcomed Ron Athey and Goat Island, as well as a series of adventurous and often provocative exhibitions such as Bad Girls and Slip of the Tongue, Janine Antoni’s first solo show. In 1994, CCA presented New Art in Scotland, by Douglas Gordon, Jane Lee and Nicola White. Key emerging artists presented in this show included Nathan Coley, Jacqueline Donachie, Louise Hopkins, Carol Rhodes, Richard Wright and David Shrigley. Ross Sinclair’s Real Life Rocky Mountain and The Persistence of Painting – helped to confirm the breadth of the nineties art scene in Glasgow.

By the mid-1990s, the building – purchased in the early 1970s and heavily used by both The Third Eye Centre and CCA – was in need of repair. CCA received a lottery grant to redevelop and expand the venue to include the villa on Scott Street. CCA moved to the McLellan Galleries for two years while the building was renovated by Page\Park architects. In 2001 the new space opened to the public, with a party which included Jarvis Cocker DJing, a set by Suicide and a new commission by Cryptic. Now home to a spectrum of cultural tenants as well as a café, bar and cinema, 350 Sauchiehall Street entered a new era.

In 2006, CCA underwent a profound cultural shift, deciding to pursue a more open curatorial policy. This open source approach encourages artists and organisations to present their own programmes in CCA. Today, that policy produces a livelier and more varied programme that offers a new kind of accessibility to audiences, drawing on the spirit of The Third Eye Centre and the early history of CCA.