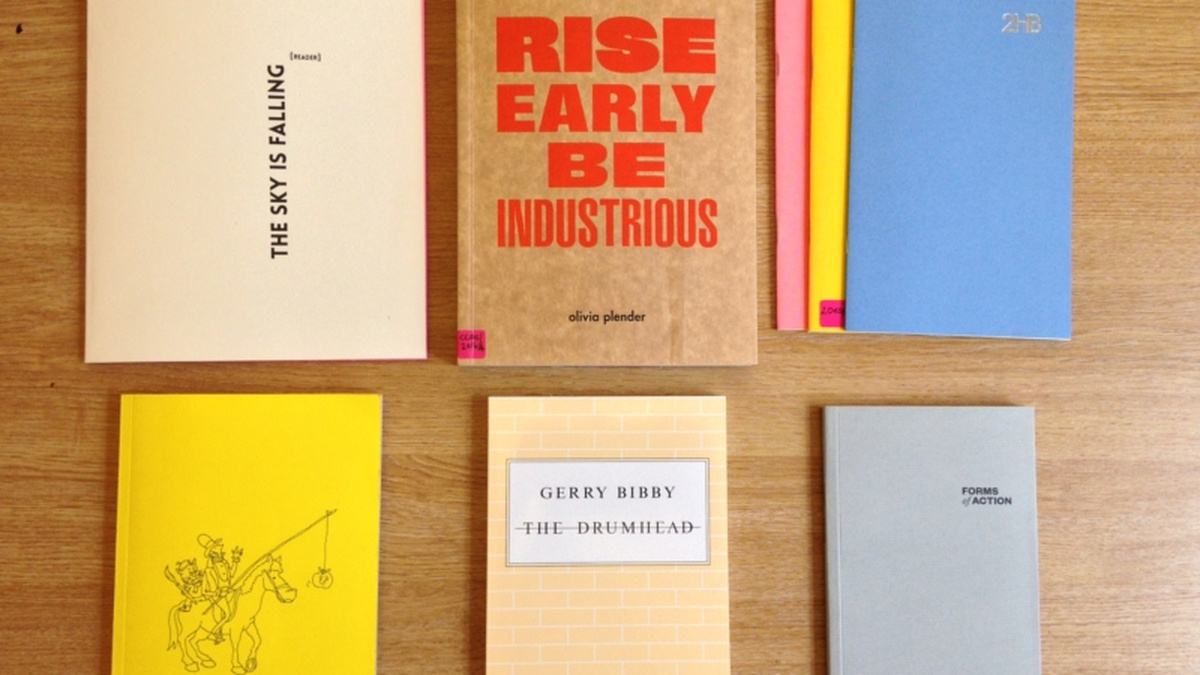 CCA works with books and publishing in many different ways.

The way we have made books and journals has changed over the years, responding to different contexts and urgencies, and changing resources. We are really excited this year to be exploring many important questions in relation to books, libraries and art practice with our summer show, The House that Heals the Soul, but we are also using this as an opportunity to discuss how we can develop our support towards different practices of publishing as an institution. And so this year we are committed to pushing further the way we use and give access to publishing, on different scales, to share knowledge and to work with artists.

Historically, it has been the role of larger arts institutions to produce ambitious monographs with artists and we continually see the importance of producing well-researched and coherently edited books. In 2016, we produced a new book with Olivia Plender, Arnolfini and MK Gallery, cataloguing her work from the last ten years, including her vastly important museum-of-communication show, Rise Early, Be Industrious, which travelled between the three galleries in 2012. We also see the importance of producing smaller scale discursive projects – in early 2017, our public engagement curator Viviana Checchia produced a new publication called Forms of Action, commissioning several important texts presenting a range of views on socially engaged artistic practice as part of an ongoing discussion in the programme. Publications have also been produced with Gerry Bibby, Joanne Tatham & Tom O’Sullivan, and, most recently, for our 2017 exhibition The Sky is Falling. As well as this, we have been thinking about how, as an institution, we can give tools to other practitioners to make their own books and experiment with different kinds of economies, expanding on our open source model. In late 2016, we launched Publication Studio, as a way for people to materialise their own books, quickly and cheaply and to start a dialogue in the city about the role of publishing in cultural practice.

Publication Studio Glasgow is a collaboration with partners My Bookcase, Good Press Gallery, A Feral Studio & artist Joanna Peace. It has two functions - firstly, it is a publishing enterprise founded in 2009 in Portland, Oregon – an international network of sibling studios, with a presence in thirteen cities including New York, London, Rotterdam and now Glasgow. Publication Studio prints and binds books one at a time on-demand, creating original work with artists and writers. It is a laboratory for publication in its fullest sense - not just the production of books, but the production of events and discussions around books.

Secondly, it is an open source printing facility housed at CCA. Every few weeks, we run inductions to teach people how to use the equipment, and you can then book the space to make a small run of your own books. These inductions will take place every four to
six weeks and have a fee of £5 to cover costs. Once inducted you can have access to the facilities by contacting Publication Studio Glasgow and booking for a day or half-day. We raise enough money to pay for maintenance of the equipment, keeping costs low to simply cover this and any materials required.

The PS facilities include a very easy to use perfect binding machine (DUPLO DB-200), a room with a table to work, A3 guillotine (Ideal 3905), a paper creasing machine, bone folders, stamps, rulers, pen markers and other hardware. For more information of costs and to book an induction email publicationstudioglasgow@gmail.com

Following a two year hiatus, 2HB returned in 2016 with a new design. We were sad to say goodbye to the old design and the beautiful fabric cover which adorned the first twenty issues, but took the decision to reduce some costs, in order that we can continue to develop our publishing in different ways.

2HB was cofounded by Louise Shelley and Francis McKee in 2009 as a journal dedicated to creative arts writing. We have now published twenty-two issues, relaunching 2HB Vol 21 with texts by Glasgow artists Lauren Printy Currie, Hannah James and Scott Rogers, and 2HB Vol 22 with texts by Joanna Peace, Georgia Horgan and Michael Ebert Hanke. It is clear that art writing is an important practice for many artists working in the city and elsewhere and we remain committed to producing 2HB twice a year.

In 2017, we will launch the first of our new critical writing publications called Small Black Reptile which will be publishing twice a year and look towards discussing contemporary critical thought within arts and culture. We have been talking about this for some time, but we are really excited to announce contributors soon, so watch this space.