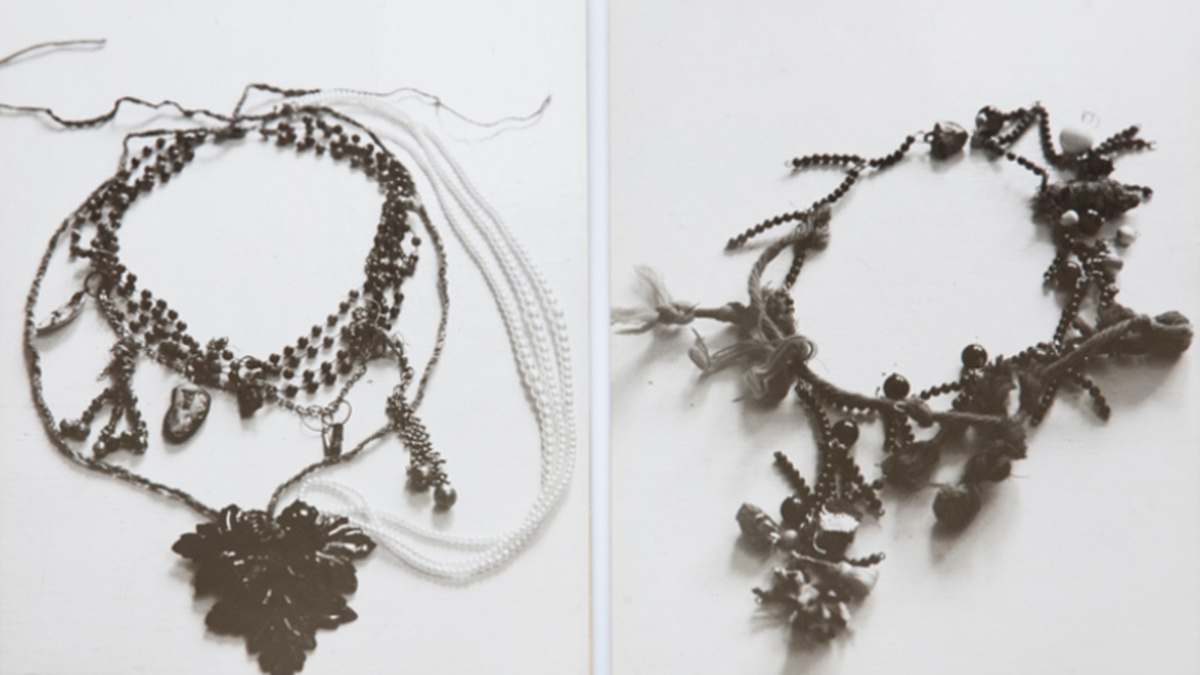 Third in a series of dark fairy tales by Ester Krumbachová.

A husband and wife lived in a dense forest and for lack of any other entertainment – cinema or television did not exist – they made two children, Hansel and Gretel, under their duvet even though they didn’t have a single penny in their pockets. To put it simply, they were cold all the time and everyone who has been cold knows you must generate warmth somehow. That was their excuse.

These children grew and the more they grew, the more they ate but the husband was a charcoal maker and his wife was also a charcoal maker. They didn’t think about it much beforehand and only now, in a crisis situation, they realised they didn’t have the resources to handle the situation. Consequently, after a short discussion they agreed that they would take the children into the forest because back then, there were many poor wolves with no property and that could solve their problem.

Hansel was frolicking and jumping with joy during the trip, picking strawberries and blueberries. He also ate some red berries, though, which led to severe bowel problems and he was soon leaving a trail of streak marks. Later it was a continuous stream and the parents used this opportunity to run away while Gretel had to keep pulling Hansel’s trousers up and down. Eventually she gave up, and put the trousers into their travelling bundle. They were alone in the forest.

Initially the children were overcome with panic though that disappeared as soon as they realised they could easily find their way home thanks to Hansel’s trail of berries. So, to the horror of their parents, they made it back and when they had eaten their fill they went to bed while the couple set to devising a new plan.

They took Hansel and Gretel into the forest once more and they ordered Hansel strictly not to eat any unknown fruit in the forest and he obeyed. Then the parents disappeared again which left the children in an exceptionally bad mood. The wolves were howling in the far distance but Hansel climbed a fir tree with the intention of staying there until the morning, leaving Gretel to her fate. His plan was changed by a little light flickering nearby which drew him in that direction. He climbed down the tree and soon, calmly and without anxiety, he and Gretel came to the gingerbread house.

When they had eaten part of the roof, the door opened and an old witch and a wizard came out. They were the owners of the house and even though they looked unpleasant they enticed the children with a variety of pseudo-humanist pronouncements, telling them for instance, that they should be in bed already and they should not eat gingerbread late in the evening.

The children succumbed to their beguilement and as soon as they entered the two old ones promptly shut them in a cage that they fastened with a recently patented lock.

At first Hansel and Gretel did not understand why they should be squatting in such a confined space. The witch explained that it was for their own good, so that they would reach the ideal weight for their age. But the more they ate and, after a constant diet of sweet things, the more weight they gained the more suspicious they grew that these two had something bad in store for them.

They looked fragile and insignificant but in spirit they were far more mature than their physical age would suggest. So the instant the witch invited them to come and get warm at the furnace they knew what it meant

Before the happy witch knew what was happening she was sitting on the very ladle that she had wanted to put Hansel on. She even ran into the oven when Gretel, the picture of innocence, hit the wizard so hard on his head with the handle of the ladle that he staggered and fell into the flames like his wife.

So now the carefree children had eaten everything they could find when suddenly they heard the voices of their parents cavorting. They ran out to meet them and they spotted them in a touch and go situation in the grass. They pretended they saw nothing and told them all about the beautiful house where everything was free. Then they led the cynical old couple deep into the forest and ran away from them.

Neither Hansel nor Gretel lost any time thinking of returning to their native hut: they went directly to the nearby town where Gretel broke into tears in front of the first passersby they encountered, telling them that both she and Hansel were the kidnapped children of parents who for political reasons had to hide their existence and that they were kidnapped by thieves who were asking for a ransom and they had escaped from the thieves and they would like to kiss their parents again.

They were very lucky and they deserved their luck as the two they met were a husband and wife, pretty good scoundrels. These two always had their fingers in a variety of wars from which they earned quite a lot of money. All they were missing was an aristocratic title and so they declared themselves to be the adoptive parents of the two children. For that deed they were elevated to the aristocracy and they moved to a large city. Hansel and Gretel were invaluable to them. They understood everything their new parents did and were a great help, having a good time doing it too.

Later Gretel married the personal secretary of her aristocratic father and after his death she married his cousin who was the boss of her former husband. And Hansel married the daughter of the chief of his father’s counter intelligence unit and after her death he married the granddaughter of his deceased wife, who was an agent of the uncle of the personal secretary of the father, which was an extremely advantageous liaison, because ever since then wars were ongoing in that region and unless everybody died, the wars are still being fought there even to the present day.