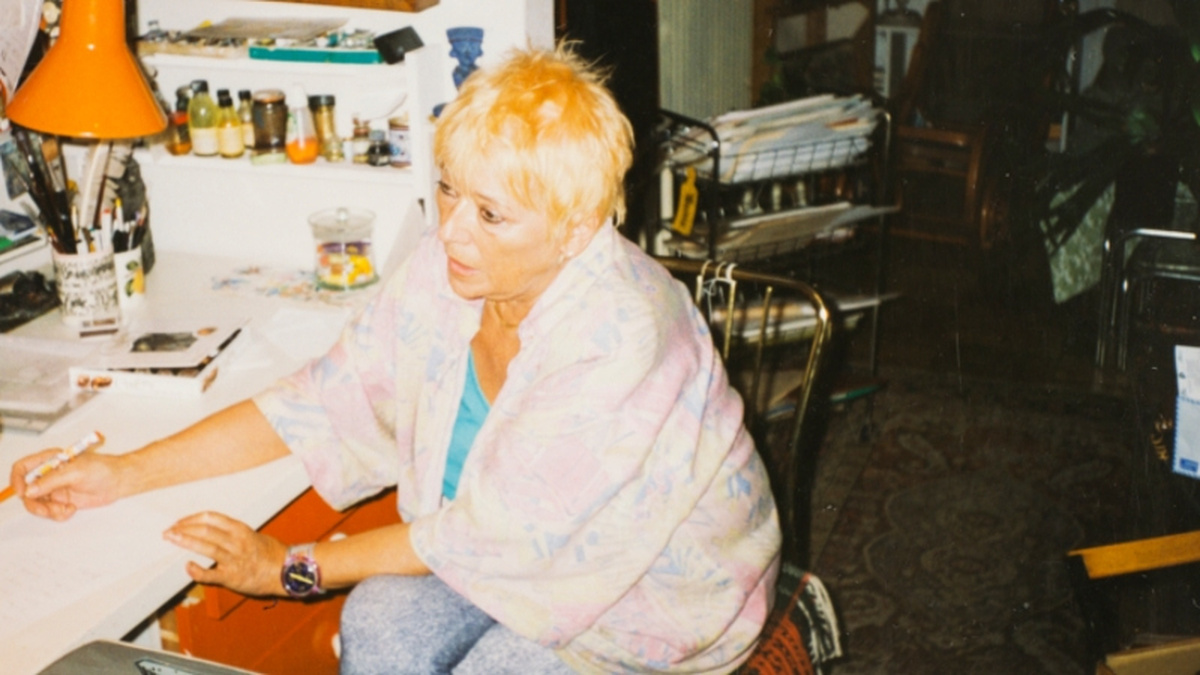 The second in a series of letters by Ester Krumbachová.

Do you know why I’m writing you? Because I want to skip work. Don’t take it personally, you’d be insulting me, that I overestimated you, but really, now I’d most like to walk with you through the forest and we’d both be smoking cigarettes and we’d both be enjoying going to the pub and we’d both be telling racy jokes, you about yesterday’s heather—how you called it yesterday’s heather. It’s so nice that there was sand there and hot water and that little bit of autumn, and that girl with you—you had a big effect on me, boy. To the point of becoming more beautiful. I don’t mean spiritually, with you no woman can become more spiritually beautiful. I mean physically. But, to tell the truth, I’m more beautiful every day, I wouldn’t want to see myself in the coffin. The young men will go mad with grief like women did when Elvis died. The paleness and seriousness—except for the slight jeer, malicious, but always present in the corners of my mouth. I’m really looking forward to it. It’ll surely be perfect, pity I won’t live to see it.

The other day I scrounged a recipe for bread that a certain Jana gave me to taste (I’ve had Jans and Janas all around me my whole life like flies, can’t you at least have slightly different names??), and baked it at once because some acquaintances were supposed to be coming by (so-called not-Jans). The bread tasted like dirty laundry that someone had forgotten in the middle of a burned-out factory for enameling dishes—who would worry about the laundry when the enamel factory burns? It was about two and a half centimeters tall and of that half a centimeter was the bread’s bottom crust. You know, I’d said beforehand that I was going to bake bread and then it would have been awkward to make some sort of stupid apology, so I cut off the end—well, sliced off isn’t really the right term, an electric saw would have been in order—basically, I managed to use a knife with the camouflage method and it broke off. I spread butter on it and they watched me and shouted, my God, you’ll break your teeth and hollered indecently like that, meanwhile I altogether attractively swallowed a piece. Do you know what it was like? as one of my friends with criminal tendencies says. Now I have to give the rest—well, not the rest, but the bread without that piece that I broke off to the rooks. I feed them just so that they don’t peck at me, those peckers, maybe even they won’t want it—trust nature, please.

How’s it going in court? Do you have some new Schiller or whatever that poor guy’s name was? You have to free people, you have to wish good things for thieves, don’t be a snob, do you know how much people steal all around the world and how happy they must be when they finally get into government because they stole enough?

Have you seen the last film I made with Chytilová, The Faun? Has it reached you yet? In Praga caput regni, or Prague caput rainy, it’s been going for a few weeks already. I hope I’ll earn enough for at least two pairs of pajamas with diamonds—forgive me, I’m tired, Johnny, so I’m tending towards joking like this.

What do you think about the Uffo over Minsk? Aha—that’s a well-placed question, no? Have you ever seen an Uffo? Don’t make that face, I see you, as I say to my cats when they want to sneak away in another direction for the purpose of improper urination. Our Honza is still claiming that it was garbage from some satellite, but I have a witness for it, and he was a chemical engineer—evidently he still is—so he’s a man of science and not an idiot and he saw it with me, pay attention: I was talking one day, I don’t know when, with Květa Fialová (do you remember Omice and that fantastic bender, that was really a work of God, no? and how Blanka came and said that she had absent-mindedly forgotten to get dressed—we were pretty well roasted, right), so anyway, back to the Uffo—I understand why I can’t be married, you know I’d torture myself with a husband if I knew how much he was suffering from me! A woman’s gentle heart knows itself at the point when the woman altogether stops thrusting its way into marriage, but bashfully lingers between some flirtation and deep contemplation about the nature of birth. But the first option is much more dear to me. Yeah—when I stopped—you’re lucky, you’re happily married and not happily divorced like I am, because you have goulash waiting at home and I don’t unless I cook it myself, but I like cooking, there’s a bit of eroticism in it, there’s no stopping it—gentlemen, you won’t understand it in the slightest, and now about those Uffos.

Right, so I’m calling Květa Fialová and looking up at the sky here at my writing desk at the same time I’m looking out the window, and suddenly it seems, if I haven’t gone mad, that in the late afternoon sky of August, early September, I see in a totally clear sky something like a crescent moon, but it looks like it’s made of gold. You know, sometimes the moon comes out like that in summer, when it’s new—it’s a skinny little thing and almost see-through if the sun’s still shining. And this was during the swiftest sunset, all orange and those opalescent colours of late summer sunsets, and this thing like a crescent shining like gold, and so I tell Květa to go look out the window to see if she sees it too, and she comes back to the phone saying she doesn’t see anything. So I say goodbye and then there’s an abracadabra, because the crescent has moved and lies horizontally with the round part on the bottom. And at one end it has—like a small black or like smoke or a dark cloud—a spot. And my boyfriend, who’s educated, comes and in front of both of our eyes it starts moving, not very quickly, and it disappears in horizontal position in the sunset. We stand on the terrace until it goes away. What do you say to that? Our Honza, the Airplanist, drily grimaces and chatters and claims that it was garbage from some satellite. But how on earth can some garbage stop, make simple moves every which way, and then start moving? Or can it? Have you read anything about it? Isn’t it navigated from some spaceship? I think so, like it can be manipulated.

I would like it if one day small creatures in silver clothes crawled around the terrace, it would be them, the golden boys, and that’d put a stop to any boredom. I’ve read so many reports about it from Brazil and Argentina, I just don’t understand what’s so special about those lands to the Aliens?? Why don’t they fly to the Zelená liška, Prague 4? Really, I’d give them some liquor so they wouldn’t dissolve into stink and odorous smoke like when I baked that bread. Then they’d melt away, maybe under the doorframe and to the neighbours, who’d call the police—you see how necessary it is in today’s world to consider everything beforehand: do you really want it—meeting with Aliens—or are you just kidding yourself without consultation? After all, there aren’t any, and if there are, who knows what they’re like. You’d have to read Technical Horizonsand Flammarionback and forth, but even that wouldn’t be enough—tell me, who in this century has been capable of some great train robbery. The robbery of the century. You see how the romance wanes, it’s a pity if you were to sentence a criminal like that, than I’d perhaps come, but I don’t know. Instead we’d go to some pub or not, really we’d go to church.

You know what, I’m already so guilty that I’m going to work again. I have to. I have no desire to, but a girl has got to. And at this age she’s an exploited maid. So you see, I have to finish writing something. Ah well, so I’ve goofed off with you. Write me some goof-off too, okay?

Write, but be content-heavy and factual. Don’t spout nonsense. You’re a man, and as such you have duties. Write just as seriously as I do. Has your little cat pissed on your work files on your work desk yet? If not, then don’t give her my regards. Every decent cat must firmly and energetically face life.

Well—you see how incapable, even stupid, I am: instead of these scribbled pages I could have sent you the same number of pages with a copy of Capital—it’s a hit now, you should read it. So bye.