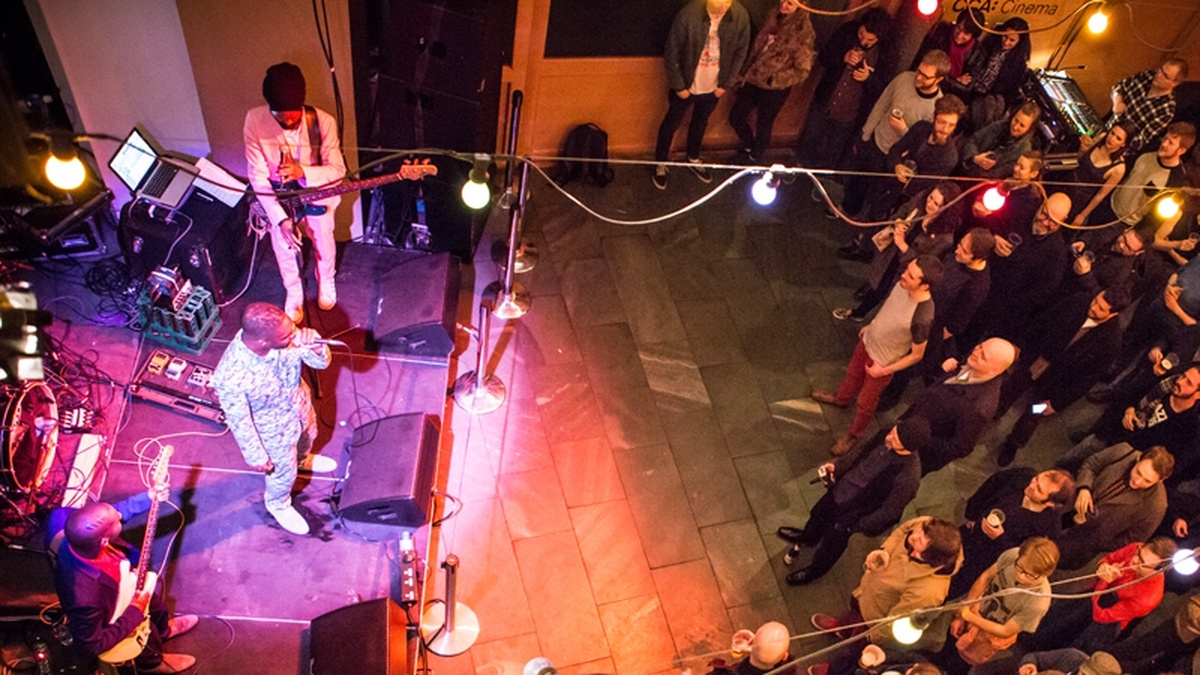 Throughout the history of CCA and the Third Eye Centre, experimental and new music has been the life blood of the programme.

Like the vast majority of our events, our music programme has evolved through relationships that we’ve built with Glasgow’s most interesting artists and promoters, and with new partnerships or one-off experiments booked through our open-source programme.

Today, in an average month, you can expect the opportunity to experience multiple genres, with our aim being to work with more peripheral artists and promoters. Each month, the open-source programme usually extends to Jazz, Blues and Americana, Free improvisation, Folk, Gaelic, Spoken-Word, Electronica and Rock, as well as music workshops, classical collaborations, international underground acts and the best of the local scene.

What we now call the Theatre space only became part of CCA fifteen years ago, following the building conversion and purchase of the nineteenth century villa on Scott Street between 1999 and 2000. Prior to this, it existed variously as The Cotton Club, Maestros and, perhaps most famously, the Maryland, where the cream of Sixties Blues, Soul, Jazz and Psychedelia played. Pink Floyd played at the Maryland after being banned by the city from other Glasgow venues, and John Mayall, Muddy Waters, Champion Jack Dupree and Edgar Broughton all performed in this space which is now akin to local legend.

The Third Eye Centre hosted many acts in the café and upper rooms, as well as its former and decant buildings at Blythswood Square and the McLellan Galleries. Some of its first acts included Allen Ginsberg and Gerhard Ruhm reading to music in the early Seventies – and our interest in poetry and spoken word across musical genres remains strong today. Tawona Sithole and Tarneem al Mousawi‘s monthly event Seeds of Thought combines spoken word, creative writing, music and performance, offering the chance for emerging performers to take the mic, with free writing workshops run by Tawona to develop new work beforehand.

Music has a precarious relationship with arts funding and it’s often assumed that it pays for itself through bar and box office takings. This of course couldn’t be further from the truth: to host genuine avant garde, international, affordable music requires money that is rarely reimbursed through the sale of tickets or alcohol. Many of the partners we work with take on this risk happily, to bring underground acts to Glasgow for the first time. Alasdair Campbell of AC Projects devotes his times to developing relationships and networks between musicians and promoters around the world, in recent years working with groups from Brazil, West Africa and Japan. Every April, Counterflows brings some truly special individuals to Glasgow, pioneers in contemporary practice across musical genres, this year’s festival includes American harpist Zeena Parkins, New York Hip Hop artist Sensational and Turkish Rom clarinet player Cüneyt Sepetçi. The spirit of Counterflows is about collaboration, experimentation and the sharing of musical culture across genres, cities and art forms.

Our venue partner Saramago Café Bar host improvisers, marginal musicians and heritage acts from around the world, DJ sets focusing on the best subcultural music from Africa, as well as Rock ‘n’ Roll, Country and the most exciting of Glasgow’s local scene. Their devotion to bringing good music to CCA comes from years of experience working with risk-taking and experimental promoters and musicians, and a passion for supporting peripheral acts.

Glasgow Improvisers’ Orchestra are another key partner, bringing world-renowned musicians to Glasgow each year for their annual festival, commissioning free jazz, classical, folk, pop and non-genre performances and collaborating with accessible music organisations around the city.

As well as live music, our programme also extends to workshops and residencies. AC Projects host a rare residency for musicians and composers in our Creative Lab space each year which is open to applications every autumn, cultural tenants Paragon have weekly accessible music workshops in the venue and Glasgow Improvisers’ Orchestra host free improvisational music classes for 0-5 year olds each month.

CCA’s Theatre was renovated and acoustically re-engineered in 2000, and is equipped with a permanent tension-wire ceiling rig, meaning that our technical team can be incredibly flexible with how the space is used. They can build shows quickly and therefore cheaply. The space sounds great, but most importantly it can handle lots of experimentation. Through the Open Source programme, we will continue to foster partnerships with artists, musicians and promoters who need a platform for presenting something new, allowing us to welcome and develop audiences who have different tastes, ages, experiences and cultures.