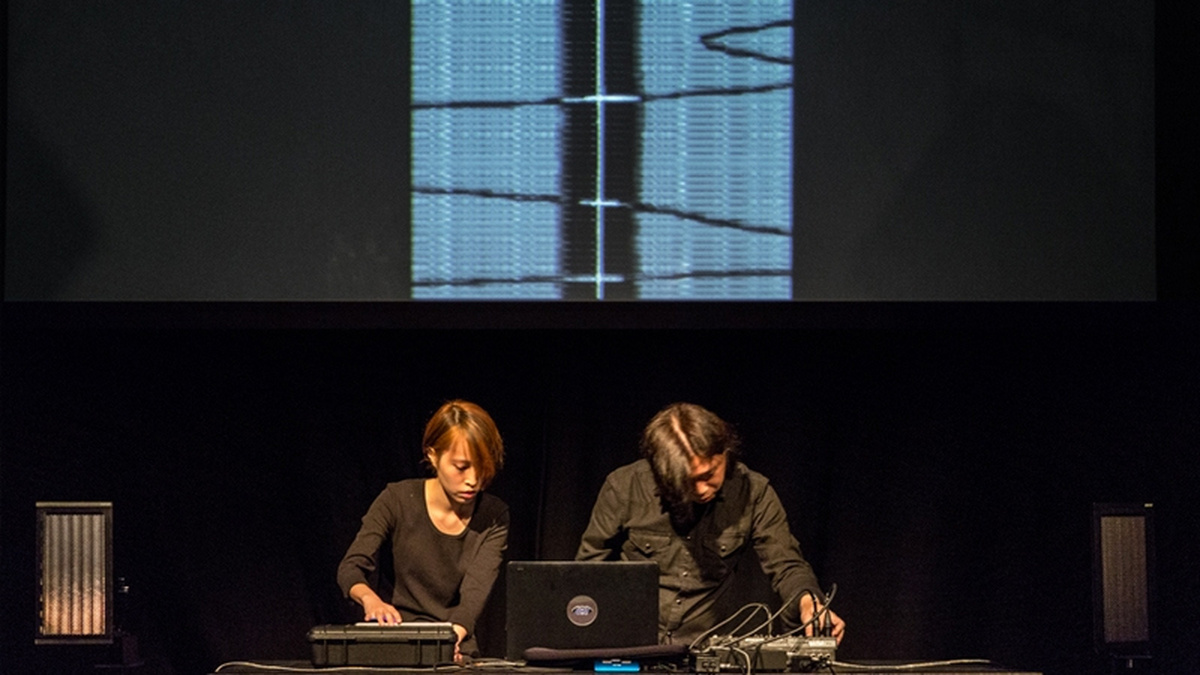 Performance by Wang Fu-Jui and Lu Yi at Counterflows in CCA. Photography by Pavel D.

"a city with a large artists' community, a great music scene, audiences hungry for film, literature and performance..."

In 2006 CCA began to develop an ‘open source’ approach to its organisational structure as a pragmatic response to the expansion of the building in 2001. The lottery refurbishment of CCA greatly increased the size of the building which now occupied most of the Greek Thomson structure, and all of the 19th Century villa behind it. The organisation struggled economically to fill such a large set of spaces and the aggressive business model that accompanied the new building did not work with the kind of programming that was expected by CCA’s audiences.

It was clear though that the new building has fine resources – excellent gallery spaces, an acoustically perfect performance space, a dramatic central courtyard with a restaurant, a wood workshop, a small cinema, an artist’s flat… And Glasgow is a city with a large artists’ community, a great music scene, audiences hungry for film, literature and performance. It seemed clear that the building had much to contribute to those wider groups. In its debilitated state in 2006, the preciousness of the building as a ‘lottery jewel’ had also faded. This gave us an opportunity to ‘repurpose’ several spaces. The bookshop space that felt misplaced became a third gallery on the ground floor. CCA office spaces that felt overly luxurious became a hack-lab and the Creative Lab residency space. Glasgow Life came in to support an independent programme for Intermedia Gallery which had become unmoored from King Street. Initially through word-of-mouth the theatre, clubroom and cinema were made available to artists and organisations that needed temporary project space.

When it became clear that offering the space in this way was useful and supportive to other organisations we started to formalise the process. For artists and organisations with minimal funding we would offer space for free. Technicians and Front of House staff would have to be paid for if needed but we offered our staff at cost, taking no profit from the organisations. Of course, if organisations clearly had additional funding we would charge for the space but still at a subsidised rate. The galleries on the ground floor remain at the heart of CCA’s own programme and are programmed solely by our own curatorial team.

To make this policy work two elements are vital. The first is co-ordination. As activities grew in the spaces, we created a role for someone to liaise and co-ordinate the multiple events across the building. The second vital element involves selection. Clearly such a policy could easily be taken advantage of or it could quickly become a kaleidoscope of random events. To prevent this, each event and every partner programme is considered internally and every new event must be proposed to CCA.

Our criteria for inclusion in the programme is based on a wide variety of things. Quality is a priority and we also give a great deal of consideration to whether the proposal is appropriate to CCA. Our programme stresses experimental work and activities that cannot be easily housed in other venues. So, for instance mainstream theatre proposals are not a high priority as there are many venues across the city that are better suited to those proposals. Equally, proposals that tend to demand high amounts of rehearsal time are not high priorities as they occupy space that could be used by other, more public, activities.

Over several years we have built up many long-term partners through this open source policy. Regular users tend to come to us at the beginning of the year and speak to us about dates across the entire year. While October and November are probably our two busiest months there are now major bookings across the entire calendar annually so that’s worth keeping in mind if approaching us with an idea.

The benefits for everyone from this include a much greater feeling of ownership of the space by a wider spectrum of the arts community. The openness of the programme also brings in a broader variety of audiences and helps us break down some of the barriers to access that can easily grow around an art centre. The building can provide support for a large section of the arts community in the city and the programme can reflect more cultural perspectives than our small team could achieve on its own. Perhaps the bottom line is we hope the activity, cultural momentum and diversity of the programme demonstrates the best possible use of public funding for the arts in the city.