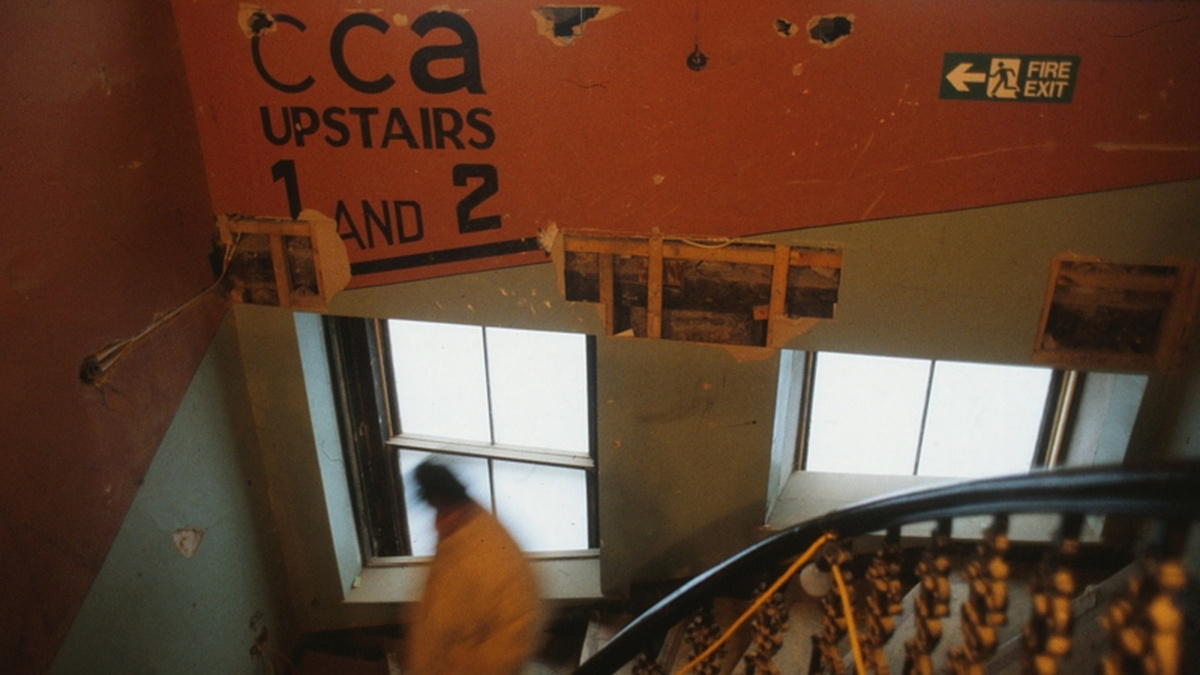 In one of the earliest videos from the Third Eye archive, Tom McGrath and his wife enter a deserted building in Sauchiehall Street and film its interior.

He walks us through each room describing what we are seeing and, more importantly, conveying his vision of the function of each space in a future arts centre. It seems likely that the video was being made to demonstrate the building’s potential to decision-makers in the Scottish Arts Council. Not long after it was shot, the building was purchased and subsequent videos document the interior renovations that would determine the layout of The Third Eye Centre.

The original building was much smaller than it is today. It’s clear that even in 1975 McGrath did not get all of the spaces in the Alexander ‘Greek’ Thompson block that he dreamt of in his video tour. Several shops remained independent in the street frontage and upstairs, Mandors occupied the east corner of the building until the mid-1990s. The Third Eye Centre was threaded through that building and the main gallery sat in the back space which had once been the Prince of Wales Billiard Rooms. Besides the galleries there was a black box space on the ground floor and a larger performance space on the second floor which could be entered directly from stairs leading up from Sauchiehall Street. The first floor was confined to a section of the Greek Thompson building and was occupied by the staff of The Third Eye Centre. This floor was divided into a series of smaller rooms (it’s now been opened up into one large space) and the various departments of the organisation were in separate rooms – programming, marketing, performance, director and finance all in individual spaces.

Over the years, the centre was heavily used and by the 1990s it displayed much wear and tear. It was, though, comfy and familiar to local audiences who had grown with the building as it morphed and adapted, offices moving around the building, bars and food counters migrating across the café space and book shops expanding and contracting within the foyer. On the other hand, it was reaching the end of its working life. There were structural problems in particular (the back wall of the gallery plays a pivotal supporting role) and possibly the labyrinthine layout of the art spaces began to seem quaint rather than useful.

After the demise of The Third Eye Centre, CCA inherited the building and its layout. The new organisation’s second director, Penny Rae, put plans in motion to address the building’s shortcomings by applying for a lottery award to refurbish the site. The application was based around the need to address the stability of the back wall in the main gallery. It was clear though that there was an opportunity to address the wider issues of the building and the organisation’s needs so permission was sought to purchase more of the Greek Thompson property (Mandors and other Scott Street units). Vitally, the 19th Century villa that was once home to the Maryland, Maestros and The Cotton Club was also purchased at this time. The elusive shop fronts on Sauchiehall Street remained just that – the unattainable dream of every director of The Third Eye and CCA.

The lottery application was successful and from 1999-2001 CCA was temporarily housed in The McLellan Galleries as the refurbishment of 350 Sauchiehall Street was carried out. Glasgow architects, Page\Park, oversaw the redevelopment and their bold decision to create the large atrium around the café transformed the building dramatically.

The redevelopment of the building had a fascinating impact on the organisation itself. The new open plan office space transformed the structure and interaction of the various departments in CCA and the expanded programming space led to our open source programme and a general sharing of the building’s resources with a much wider community of artists and independent programmers.

Sixteen years on from the redevelopment, 350 Sauchiehall Street faces new challenges. There has been natural wear and tear throughout the building as it is being well used. Equally, there’s a need for renewal and constant upkeep of the general fabric of the building where we need to take preventative measures to maintain its integrity. A growing awareness of carbon expenditure impacts on how we consider energy usage across the various spaces too. The redevelopment was quite enlightened in its provision for disability access in 2001 and we have worked hard in recent years to develop an access guide for the building, provide staff training and ensure we can welcome a diverse audience, but there is still room for improvement in access to the building and that remains a high priority in all current and future assessments of the venue.