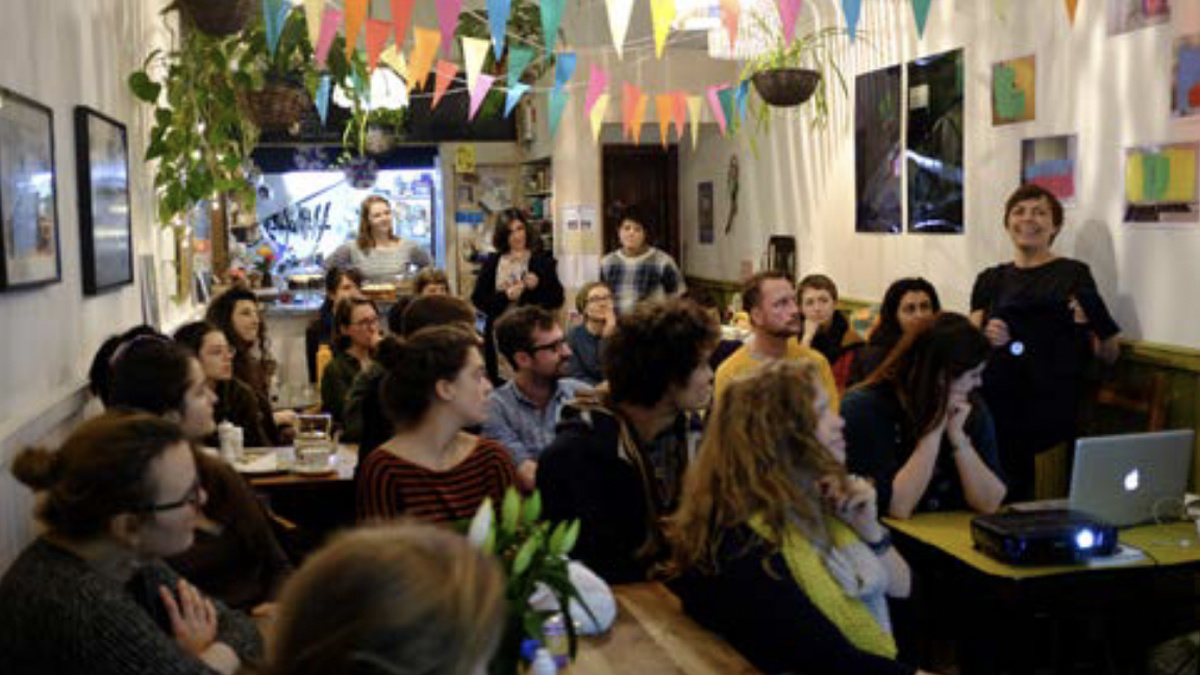 You Say Community I Say Civic

This editorial represents a point of arrival following a three-year-long trajectory. When CCA launched its public engagement programme, during the summer of 2015, it generated a new kind of critical discourse and self-reflexive ethos within the organisation.

During the last three years, the programme has been produced and delivered in many different sites across the city, reaching many different groups and individuals. At the same time, it has devoted a fair amount of energy and resources to questioning its own purpose. This was important, not only for the self-awareness of the organisation, but also in catalysing an interrogation of the social, political and civic responsibility the programme claimed to embrace towards the city it operates within.

This process of reflection and self-reflection materialised at various stages, in both private and public moments. The starting point was a study group named Socially Engaged Art Practice, which was created to explore the meaning of the term ‘engagement’ and how it might be practically applied. Next came Social Intentions, a symposium about the use of socially engaged art practices within institutions in Europe; and following this, a more long term programme, Intentions in Action – conversely about the use of social practice within the arts. Forms of Action was an exhibition presenting socially engaged art projects from various parts of the world and with it a publication introducing a series of curatorial perspectives on the subject. This exhibition ushered in the final phase of the project to date – the creation of the School for Civic Imagination where, after a process of analysing and questioning, we are now attempting to nurture the role that art can play in society and, importantly, to further challenge that role.

As an institution CCA is now more aware of the current terminology in use within the contemporary art system, as well as its meaning, when talking about public engagement. Perhaps the key point for us is questioning what we mean by public. The programme is public in its attention towards the political and social profile of the public sphere, rather than its connection with different or individual publics as segregated communities. It is for this reason that we are invested in presenting programmes and events such as The Scottish-European Parliament and Political Animal. These projects are aimed at a direct engagement with the conditions of civic society and strive for real involvement in decision making. But they also seek to alter the terms in which such decisions are understood and carried through. Accordingly The Scottish-European Parliament project creates a space where individuals and groups can come together to deliberate on the ramifications of the Brexit situation. Thus, a debate about wider, global, political implications can take place alongside a mobilisation to deal with its effects on the everyday lives of citizens. Likewise, in the Political Animal project we seek a new language for civic engagement which leaves behind the superficialities of journalism in the age of ‘fake news’ and establishes an debate at a more nuanced, consensual and communal level.

We are practicing socially engaged and civic art. Being civic means relating specifically with the locale and aiming for the re-empowerment of local actors. For CCA this translates into focusing on the intermediaries within the public sphere. Instead of working directly with communities, CCA’s public engagement programme interacts with the practitioners interested in or already addressing social and political issues.

It is for this reason that we are invested in presenting programmes and events such as The Scottish-European Parliament and Political Animal. Though at first they may sound specialist and aimed towards the privileged protagonists of this city (art practitioners, academics, politicians...), in reality they are designed for the general public and aim to foster critical awareness of these roles – rather than reproduce the echo chamber of reassuring and often elitist politics.

What we are interested in is the potency of art in influencing practitioners and contributors so that it may allow them to view themselves in a different way. That would imply CCA should be a catalyst for subversion, rather than for community development support.

It is now time for the public engagement programme to evaluate all the findings and to draft a new chapter. From August 2018, the programme will go silent for a while and come back as soon as a new vision can be presented to all of you.

Editorial originally published in the May - June 2018 CCA Brochure.