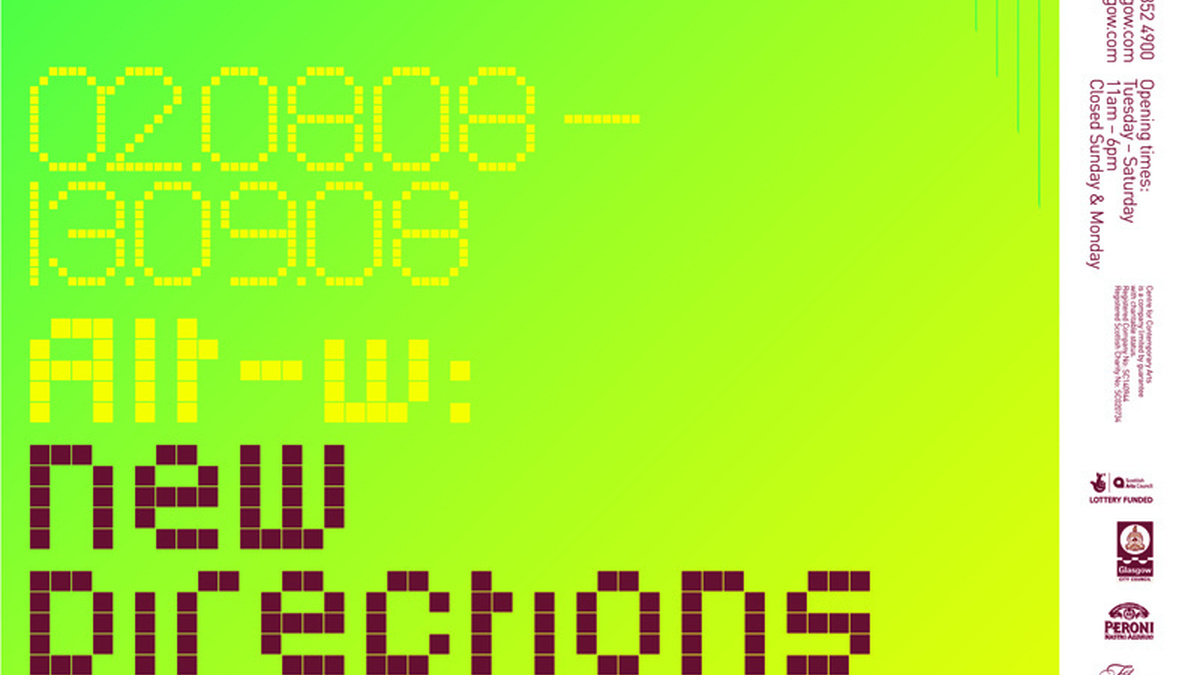 This exhibition presents a snap-shot of new media practice and creative engagement with digital culture, as seen through the lens of the Alt-w award. Established in 2000, Alt-w has funded over 60 practitioners supporting key experiments with new technologies and web-based creativity.

Initially concerned with supporting artists’ experiments with the emerging medium of the world wide web, the works on show represent the dramatic evolution in digital culture. The exhibition will explore the rich diversity of artists who have been supported by the Alt-w fund since its inception and will show the new directions in which the fund will move. The focus for 2008/09 is to support projects which dynamically engage audiences beyond the screen.

The Alt-w award is split between supporting pure research and enabling dynamic production. The huge range of ideas on show here and the depth of enquiry which founds these works reasserts the vibrancy of play, experiment and research in new media practice in Scotland.

A brief history of the award is presented in a selection of 15 websites forming the Site of the Day programme. These works range from the abstract or comic, to historical and theoretical. We hope that you will be lured by their quality to explore something new each time you visit CCA.

Beverley Hood's Madame I (2007) is a short animated film created for mobile phones. You can download it free of charge via Bluetooth onto your mobile device in the gallery. The work draws on a nineteenth century neurologist's archive documenting the condition of a patient, 'madame i', who had lost any awareness of her body. Having crossed an entire century, this story eerily talks back to us about the gaps between perception and sensation.

Stepping into the new interactive installation Blowup (2008) you are confronted with a ‘broken mirror’ reproducing an alien and fractured image. A live video feed is cut up, redistributed and distorted according to a number of algorithms which respond to movement. The work was produced by Simon Biggs and Sue Hawksley as part of their collaborative practice 'articulate animal' which brings together interactive installation and choreography.

Nicky Bird's Question for Seller (2006) playfully explores family photographs and online commerce. Using the auction site eBay, the artist collected vintage photographs, collated them into a book which was resold on eBay. A new book Gay Interest Beefcake (2008) will be made to join Question for Seller and sold (with the seller id: 'belindafindus') in a 10 day eBay auction closing at the end of the exhibition.

The Fallen Oak (2006) large projection is a three dimensional ‘fly past’ of the HMS Royal Oak, the first battleship to be sunk in WWII with the loss of 833 sailors in Scapa Flow, Orkney. Chris Rowland’s work is concerned with re-tasking computer games technology. His company ADUS Ltd now make sonar surveys of archeological sites bringing us these high definition images from the depths of the sea which also include the SMS Mark Graf and the SMS Köln.

Simon Richardson’s Broken Glass Harp (2006) is an elegant musical instrument created with great simplicity and playfulness. Sweeping the mouse across the screen recalls the mechanical fascination of the traditional music box.

Mandy McIntosh’s Sun Bed City (2001-2008) explores the proliferation of tanning salons in Glasgow and Tokyo. She revisits this work with the graphic slogan "All our beds have been re-tubed" producing three new digital drawings which reference Egyptian gods of death and a 29 year old mother of two, who tragically died of skin cancer after using sun beds twice a day for seven years.

The interactive installation A-Life (2006) reveals the incredible complexity which evolves from simple systems. Drawing inspiration from John Conway’s Game of Life, Nigel Johnson’s work incorporates elements of artificial intelligence, cellular automata and computer gaming. Left to its own devices the process will follow its path through generations of life and death where a cell’s destiny is governed by how many neighbours it has.

Deviant: The Possession of Christian Shaw (2004) explores the best known case of demonic possession in Scottish History. This website created by Donna Leishman offers a rich narrative landscape for the user to browse: uncovering hidden scenarios while experiencing her story. Each leaf, cross and window could open a new path into the story, let yourself get lost inside.

CCA’s resource room has been turned into a laboratory where Jaygo Bloom has (with Ian Campell and Paul Fernihough) created the World Wide Wegg (2008). Premiering at this exhibition, the installation is a dynamic live performance. Hens living in a community farm in Edinburgh will be networked with the CCA so that not only will fresh toast be made in Glasgow the moment an egg is laid, but lottery numbers will be bought offering a promise of escape from the day-to-day over the breakfast table.

With Zoë Irvine’s Magnetic Migration Music (1998 - present), installed in its ‘mix tape’ format, you can explore and mix your own soundscapes from fragments of discarded audio tape. Strands have been found all over the world wherever tape players have ventured. These fragments are worn and battered but can be re-spooled and listened to.

From 7-9pm on Saturday 13 September, the Alt-w closing party will be curated by Dan Norton and will feature a series of actions from artists who have produced work through the preliminary years of home computing. Live audio and visual mixing will take place in a party atmosphere along with the announcement of the recipients of the 2008/09 Alt-w awards and the close of Nicky Bird’s auction.

All surgeries are free, to book please email rsvp@mediascot.org