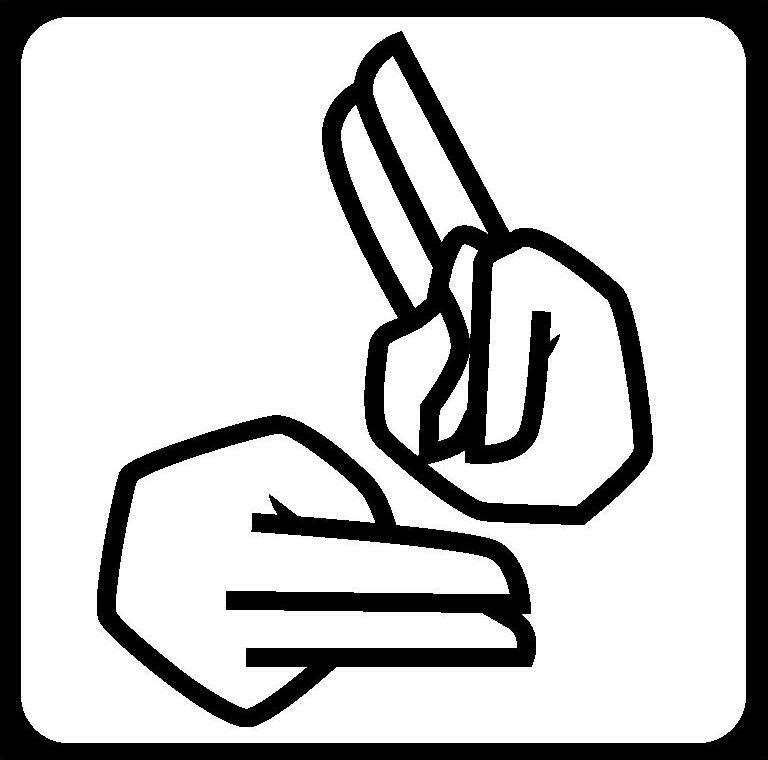 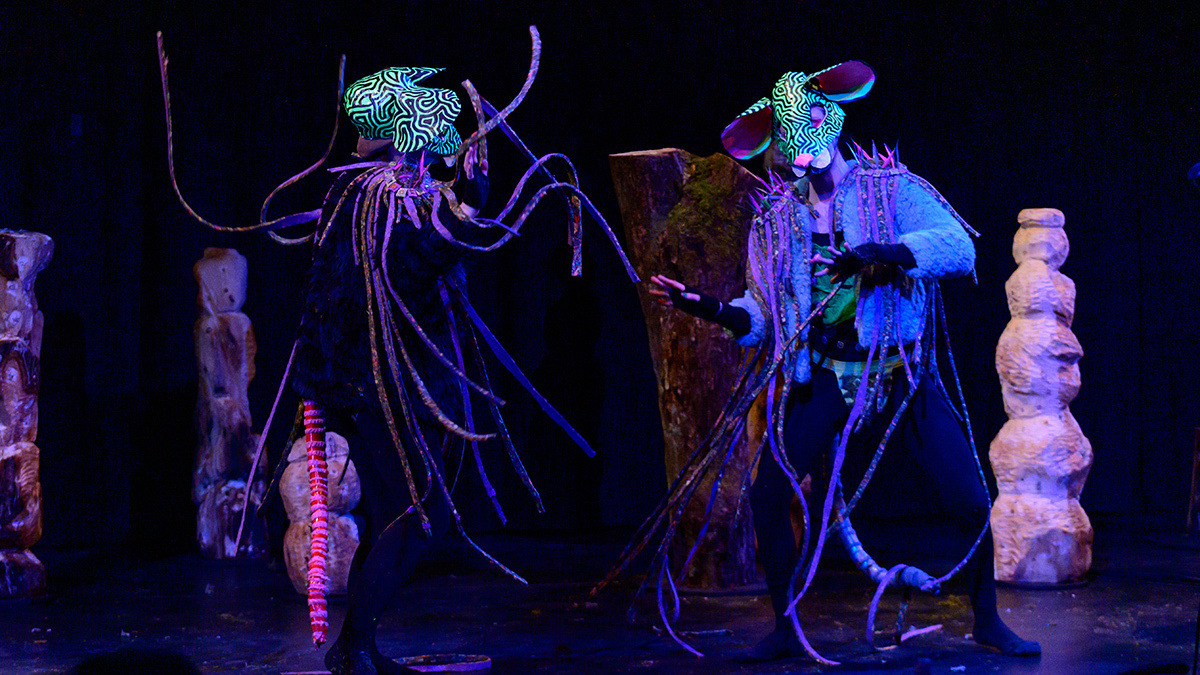 The Rats of Woolpit by Brawk Ward and Esther Splett

Join us for a night of transformations, surreal stories, cabaret creatures, and grotesque beauties. Where nothing is quite one thing, nor the other!

//BUZZCUT// presents this October’s Double Thrills, a night of radical live art and performance.
October’s line up has been produced in collaboration with Rhubarb Festival. Canada’s longest running new works festival, Rhubarb is based in Toronto and acts as a hotbed for experiments in dance, theatre, music, and performance art. We’re presenting their international guests alongside Glasgow based artists for two consecutive nights so you have no excuse to miss it!

Join us in the Theatre at 19:00 then go to cackle and cry at camp costumed psychodrama with Theo Seddon, be mesmerised by Femme Castratrice’s grotesque sensuality. Before returning for The Rats of Woolpit by Brawk Ward and Esther Splett a pair of grotesquelly queer (and queerly grotesque) Canadian artists presenting a long form piece incorporating dance, puppetry music and sound to tell the story of two alien rats discovering humanity through what we throw away. Then the evening will close out with the horror that is SHREK 666.

Portions of Shrek 666’s performance includes strobing lights and may be unsafe for people with epilepsy or light sensitivity issues.

Due the Covid-19 pandemic and with the safety of audiences who remain at high risk in mind, we strongly encourage mask wearing whilst sat in the Theatre and will have disposable face masks available at the box office.

Esther Splett and Brawk Ward play alien rat bastards with yeast infections who harvest the mossy detritus from pop-psychology in this electronic and sensory performance. Through dance, puppetry, music and sound collage, The Rats of Woolpit poses the question of what alien creatures would make of us. As the creatures rummage around in our trash, consuming and excreting our waste, will they finally become us? The rats burrow and scavenge, deep into the darkest crevasses of humanity.

Brawk Ward tries to queerly imagine other paths their addict body and mind can take beyond the typical fork in the road offered in recovery programs: either “jails, institutions, and death” or abstinence. The only “beyond” Brawk has found so far has been through joke writing, poetry, object puppetry and drag. brawk sometimes goes by broke hassle, @br.awkward, howhen, hamlet (not that one), amy winerack, Max Q. Lynne (very feminine) and broccoli (only if you think it is necessary). brawk is a white settler and a gender nonconforming fag that uses they/them pronouns. Their work has been featured frequently at Video Fag, Buddies in Bad Times Theatre and Glad Day Bookshop. They are also a collective member of the community arts space, Unit 2, as well as the Bricks and Glitter Festival.


Esther Splett is a multidisciplinary artist and musician who uses sound, video and performance to create art drawing from obsessive personal themes. In their art practice, they perform grotesque femme identity from the delirious perspective of an outsider, drawing from the lens of madness and monstrosity in relation to queer identity, sexuality, and the worlds of contemporary music and art. www.esthersplett.com 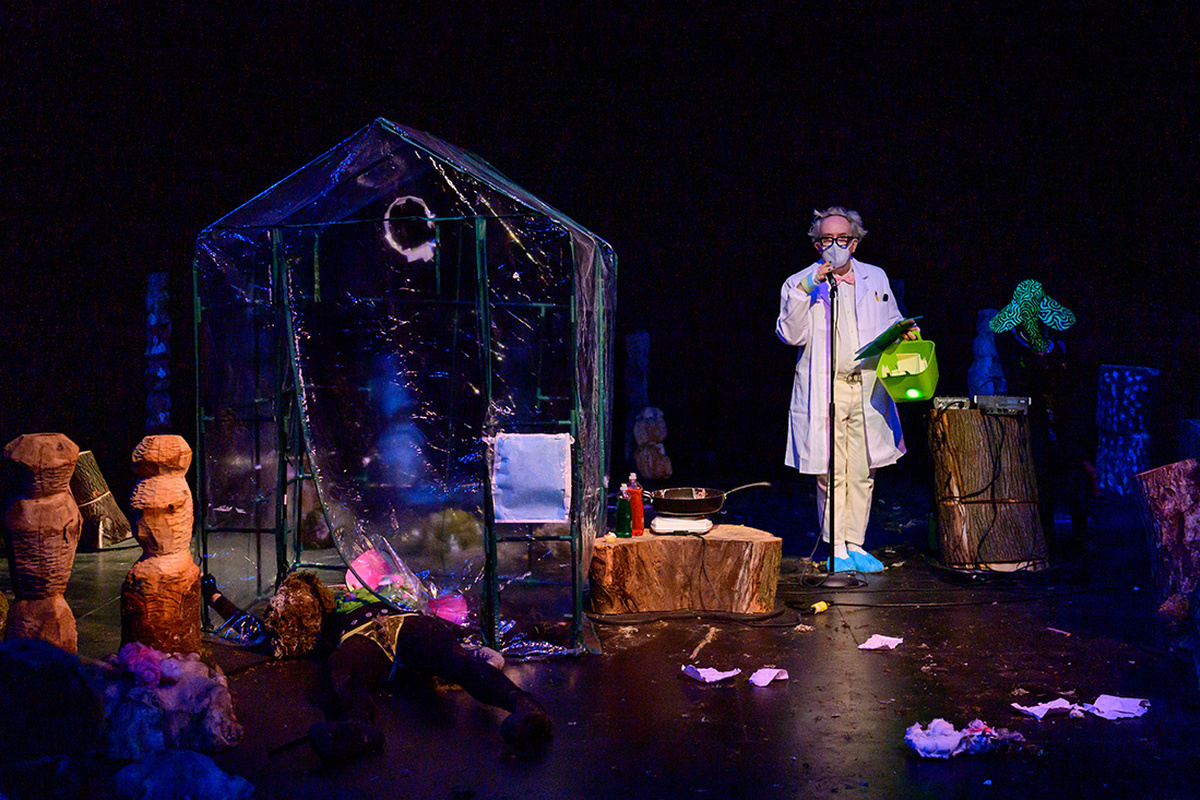 Are we delving into mysteries we weren’t meant to know?

A large vagina enters a room and bites a very boring man.

A night of horror, singing (actually no singing) A MONSTER!

Theo Seddon presents an extract of his work in progress show Hairy Beast. Theo explores what it means to be a man with a vagina, with a night of horror, comedy and a life size vagina. So take the clunge and snatch up a ticket. This show is not gash. Stop fannying around, look at (t)wat lies ahead. DANGER!!

Theo Seddon (he/him) is a comedian, writer and performance maker. He makes performances that use comedy to reflect on hard topics surrounding gender and identity. His work is heavily informed by his experience of transitioning and living as a transgender man. If there is a way to turn any hard topic into a camp, heavily costumed, silly performance - he will find it.
Theo advocates for the inclusion of transgender voices in all forms of media and works to change the trans narrative to revolve around trans excellence and trans love. He believes in gender as a construct and not an evolutionary right. 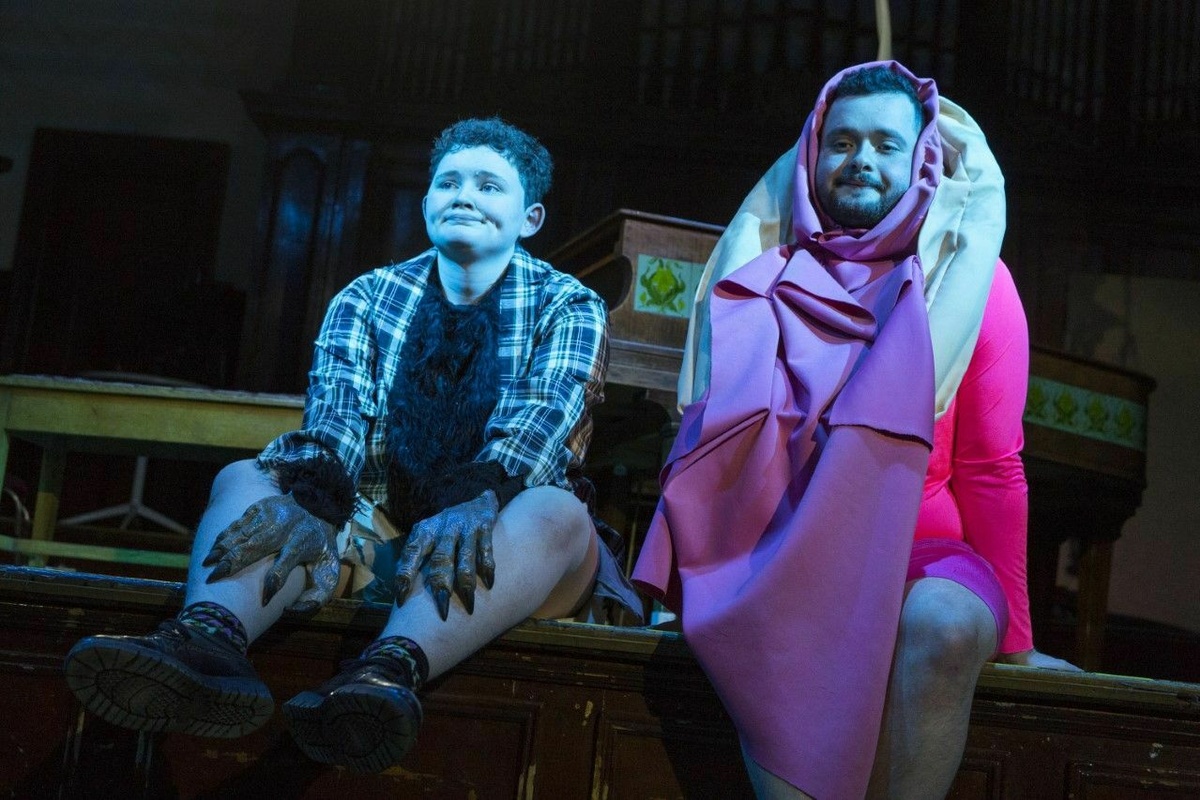 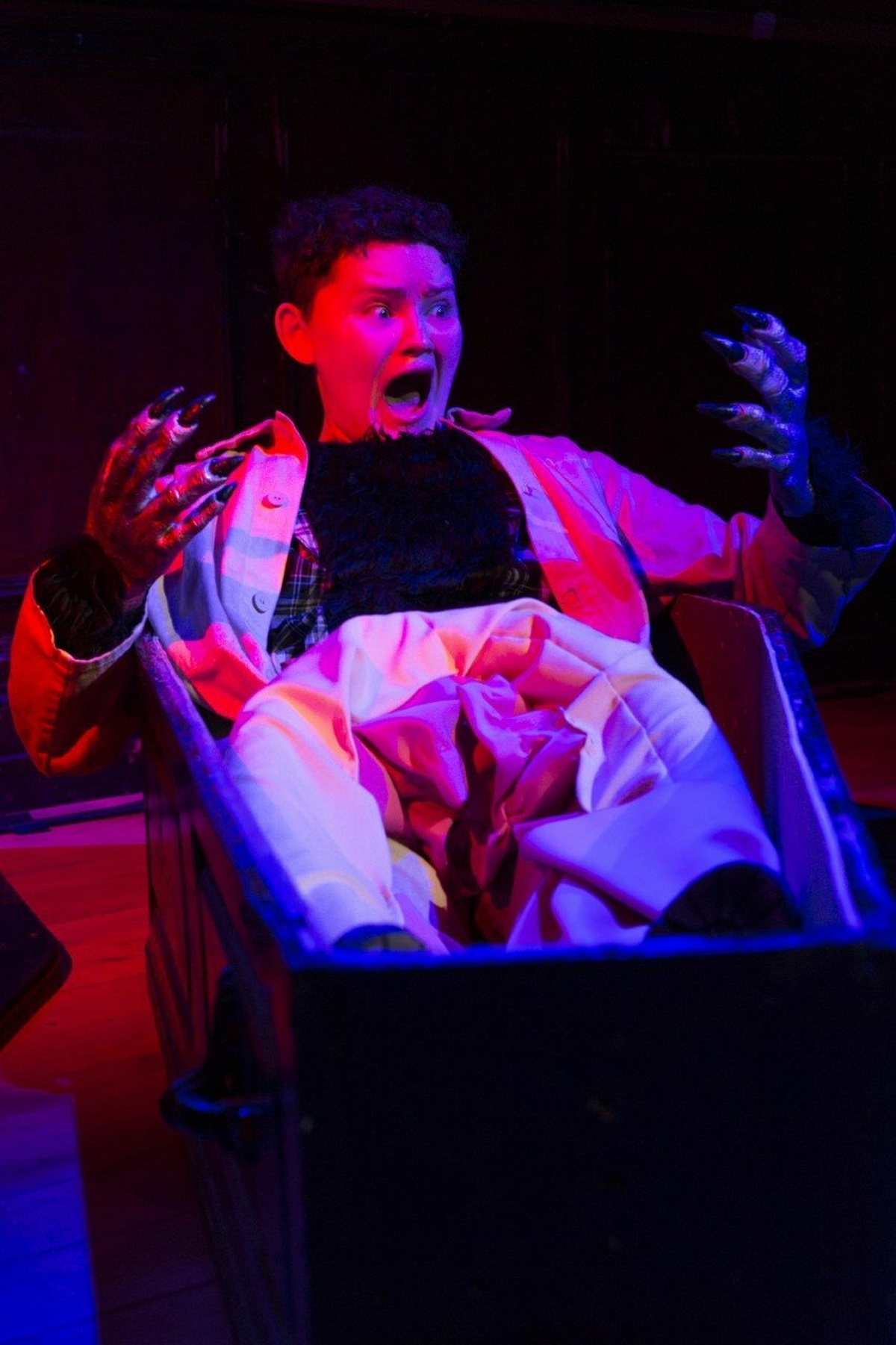 In this game, those with the greatest power obsessively desire your body, making it your most valuable asset both in the physical world and the attention economy. However, utilising this asset too obviously will result in ostracization, dehumanisation, incarceration, and deletion. You don't have a lot of resources, and the successful navigation of this confusing and contradictory minefield becomes your only chance at making it until the very end. Can you walk this delicate tightrope?

The aim of the game is to survive, and I believe in you.

This act is dedicated to all the **spicy accountants** out there who have struggled and continue to struggle against the machine of misogynistic censorship.


Chao-Ying Rao (performing under Femme Castratrice) is an East Asian visual and performance artist based in Glasgow. Her practice involves negotiating complexities around objectification and narcissism, often using humour as a tool to disarm and charm the viewer. Her background in dance was finely honed through years of practice in the most prestigious strip clubs of Edinburgh and London. Chao-Ying is interested in pop culture representations of femininity, social media censorship, and the subtle and not-so-subtle legacies of Orientalism. 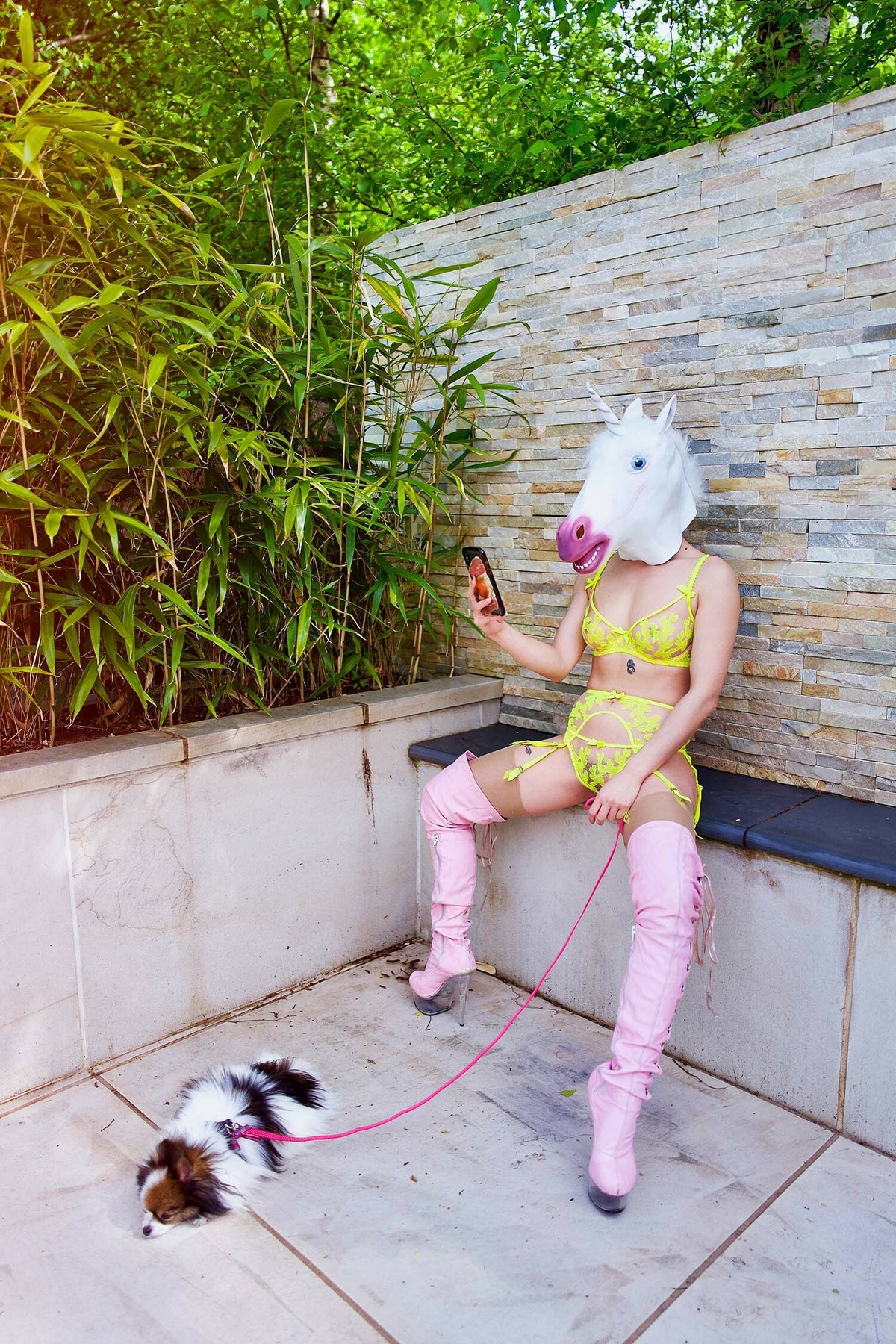 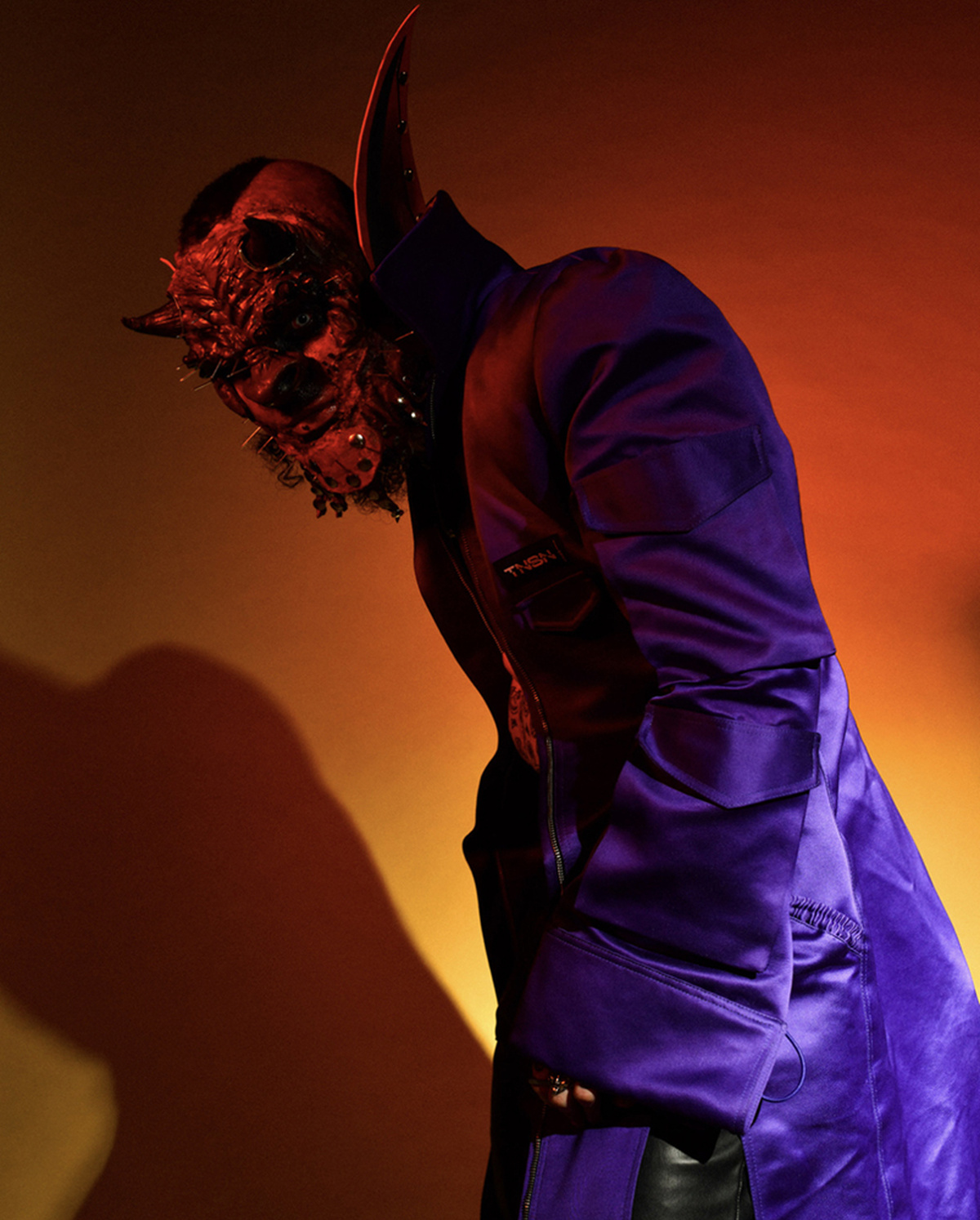