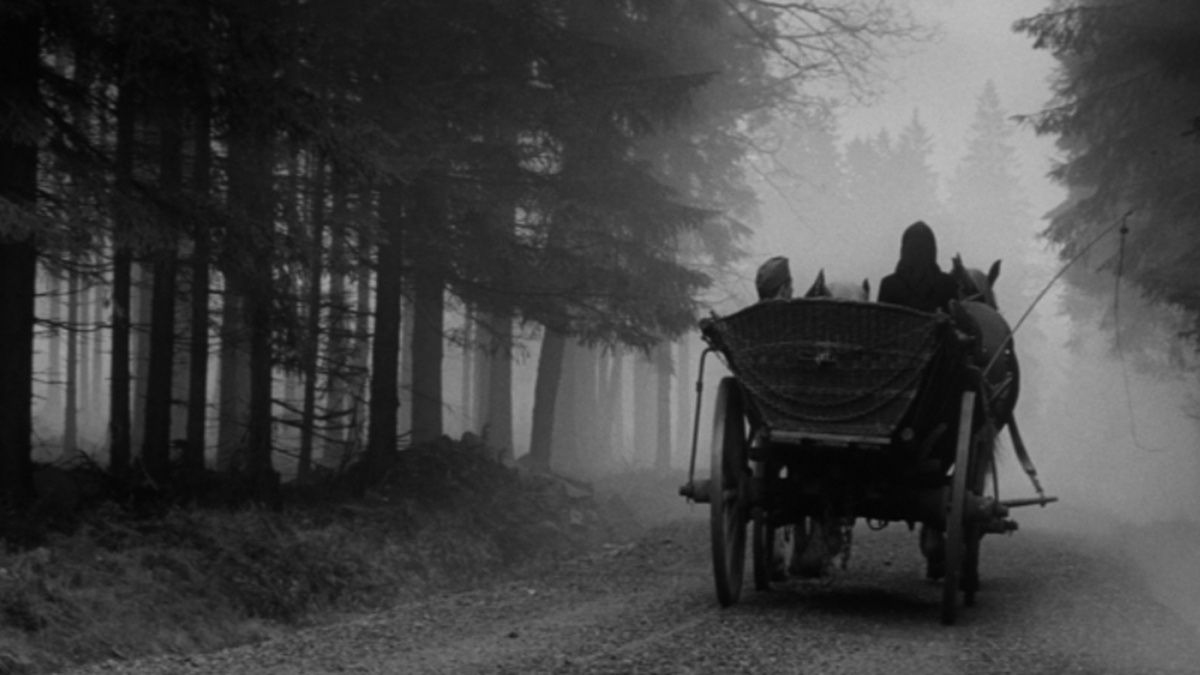 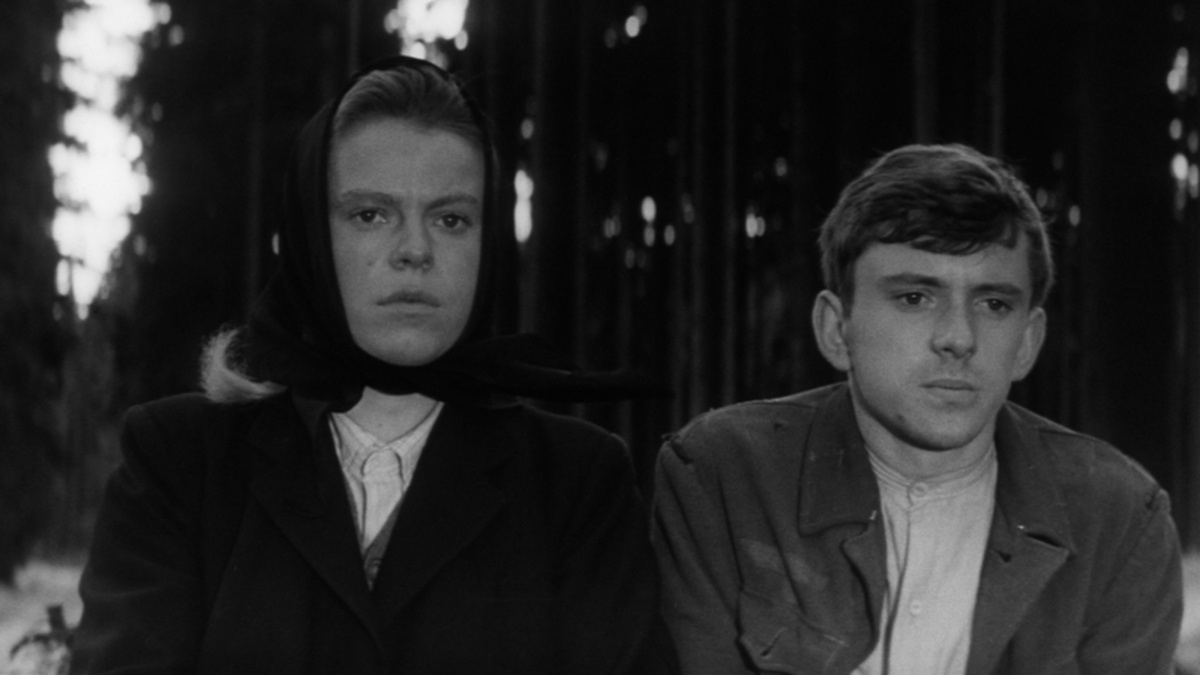 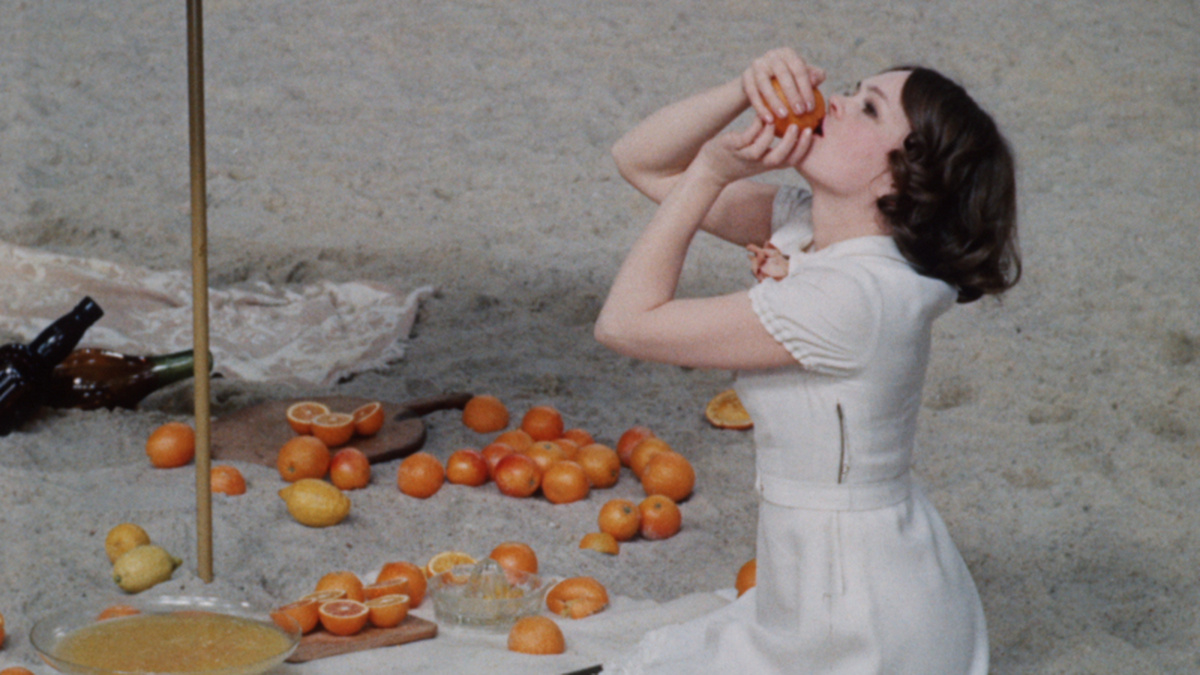 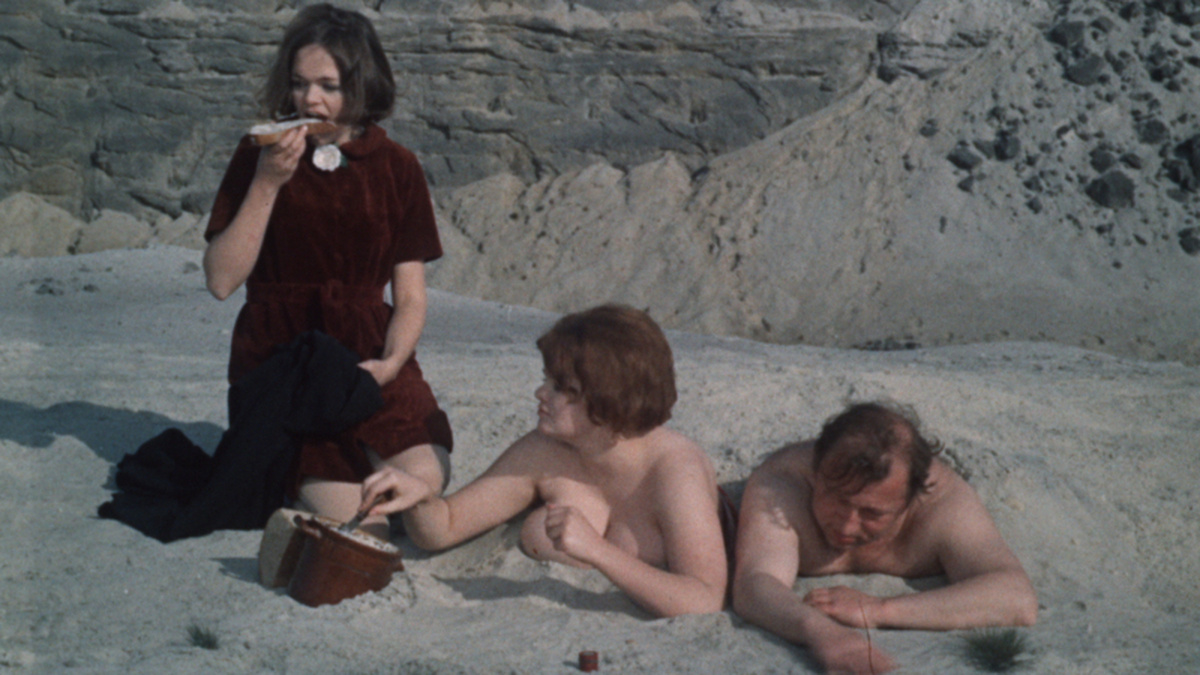 One of the roles of Iva Janžurová’s life was as the heroine in Kočár do Vídně (Coach to Vienna), a psychological drama by director Karel Kachyňa and screenwriter Jana Procházka. The experienced filmmaking duo offered the then 25-year-old a role in 1966 that highlighted her dramatic skills in an intimate framework. Janžurová had appeared in the small part of Bertýna Petrželová in Ať žije republika (Long Live the Republic!) (1965), in which Procházka and Kachyňa also returned to the era of WWII, respectively its aftermath. In the spirit of the Czechoslovak New Wave, both pictures – along with the later Noc nevěsty (Nun’s Night) (1967) – radically revised the depiction of the country’s recent history. Rather than an overhaul of hitherto optics (the evil German, the good partisan), they introduced relativisation centred on a concentration on the individual and his experience of “big” historical events. The intimate nature of the story is underscored by cinematographer Josef Illík’s close camera work… In A Carriage Going to Vienna two fleeing Austrian deserters force young villager Krista to carry them through Znojmo and across the border in her cart. She agrees, spying a chance for revenge: The day before the Germans had as a deterrent hanged her husband and she aims to take the lives of the seriously injured soldier (Luděk Munzar) and his naive young friend (Jaromír Hanzlík). However, the situation plays out completely differently than she had planned: Despite her initial resolve, she cannot overlook the fact that the “culprits” are above all individuals, victims of circumstance just like her. The actions of a group of partisans bring the story to a brutal conclusion… This timeless story exploring the redistribution of guilt and revenge in a period of upheaval naturally soon ended up in the vaults of normalisation-era censors.

It is May 1945. The Germans hang the husband of a young countrywoman for stealing several sacks of cement, as an example to others. Shortly after laying her husband to rest, the woman is held up by two German-speaking soldiers who force her to hitch horses to her farm wagon and drive off with them. One of the soldiers is badly wounded and lies on the hay at the back, while the other, a young Austrian called Hans, asks the woman to take them through Znojmo to the closest Austrian village. The woman sees the situation as an omen and an opportunity to have her revenge. Expressionless and unresponsive to the young man's friendly chat about his hopes for the end of the war, she presses forward. The older soldier is in great pain and tries to kill himself. Hans takes the pistol away from him and the woman uses an unguarded moment to throw it off the wagon, as she already did with their compass and daggers. When Hans learns about this he kicks the woman out of the wagon but she continues to follow them, close as a shadow. The wounded soldier dies and the young soldier buries him in the forest and then falls asleep, exhausted. The woman sneaks up to the wagon unseen to kill the loathed enemy with an axe. She finally starts beating him with her fists instead. The two crazed people end up on the wagon, locked in each other's arms. Asleep, they remain like this when the partisans find them. Despite the woman's pleas, they kill Hans and then rape her. The woman leaves the forest, driving away with the dead body of the young soldier.

Director Věra Chytilová’s tragicomic films often focused on themes turning on how “material fatigue”, curiosity and boredom can cause infidelity in a relationship. This film sees the director staying true to form with a loose adaptation of the biblical story of Adam and Eve (and the tempter serpent). Ovoce stromů rajských jíme (Fruit of Paradise) was the last film to be made by Chytilová in the liberal climate of 1960s Czechoslovakia. Made in close cooperation with screenwriter and costume designer Ester Krumbachová, the film also benefits from a powerful aesthetic contribution by way of cinematographer Jaroslav Kučera. This trio worked together to much acclaim in Chytilová’s previous Sedmikrásky (Daisies, 1966). But this subsequent opus goes even further in terms of storytelling stylisation, oscillating as it does between a detective story and a comedy of manners. Serving as an essay on truth, lies, friendship and betrayal, the film is set in a luxurious guest house, boasting a large garden, and isolated from day-to-day reality. Married couple Eva and Josef are among the guests attempting to enjoy the idling away of time. The bored wife is enamoured by mysterious seducer Robert – before it becomes clear to her that he is actually a serial killer of women. The quick-witted Eva manages to defend herself in the face of the cynical psychopath, talking her way out of a tight spot. Upon returning to her husband, Eva goes back to her conventional co-existence… This movie – a demanding film for the audience – bubbles with philosophical subtexts, and experiments in form and style; it can in fact be read in a multitude of ways. Indeed, the film, produced in 1969, also serves as a circuitous commentary on the suffocating climate of “normalisation” gripping Czechoslovakia after 1968. Entered into competition at Cannes, the cryptic picture merely ended up baffling the jury. Fruit of Paradise is assisted by the music of Zdeňek Liška, as well as by strongly stylised performances from Jitka Nováková, Karel Novák and Jan Schmid, whom the director brought to the screen from Liberec’s Studio Ypsilon theatre. Věra Chytilová returned to the story of Adam and Eve, albeit unsuccessfully, in Vyhnání z ráje (Expulsion from Paradise, 2001).

In the garden of a pension, Eva and her husband Josef are enjoying a siesta. Here, they meet with the lonesome, mysterious-looking Robert. During play, a key falls out of Robert's pocket. The curious Eva picks it up and sets off on an expedition. In Robert's room, she finds a briefcase soiled with mud, which Robert had forgotten by her parsley patch before, and in it, a date-stamp. Soon afterwards, she learns that another victim of an unknown murderer of women has been found, with a number and date stamped on her forehead. Eva concludes that the murderer must be Robert. Robert reckons that Eva has revealed his identity and tries to kill her several times. Eva confess Josef about her presence in Robert's room, but the husband turns jealous and does not believe his wife's fear of Robert. He even becomes Robert's friend. Robert prepares thoroughly for the next attempt to murder Eva. He takes her to a bar and openly announces his intention to her – for she might reveal him and besides, killing brings him pleasure. Eva's last wish before she dies is to borrow a coat from the murderer, because she is cold. Then, she pulls a gun out of his pocket and shoots Robert dead. Josef returns to the pension and investigates where she has been. They both, however, agree that it would be better not to know anything, forgiving each other everything and going to live happily ever after as they used to live before.