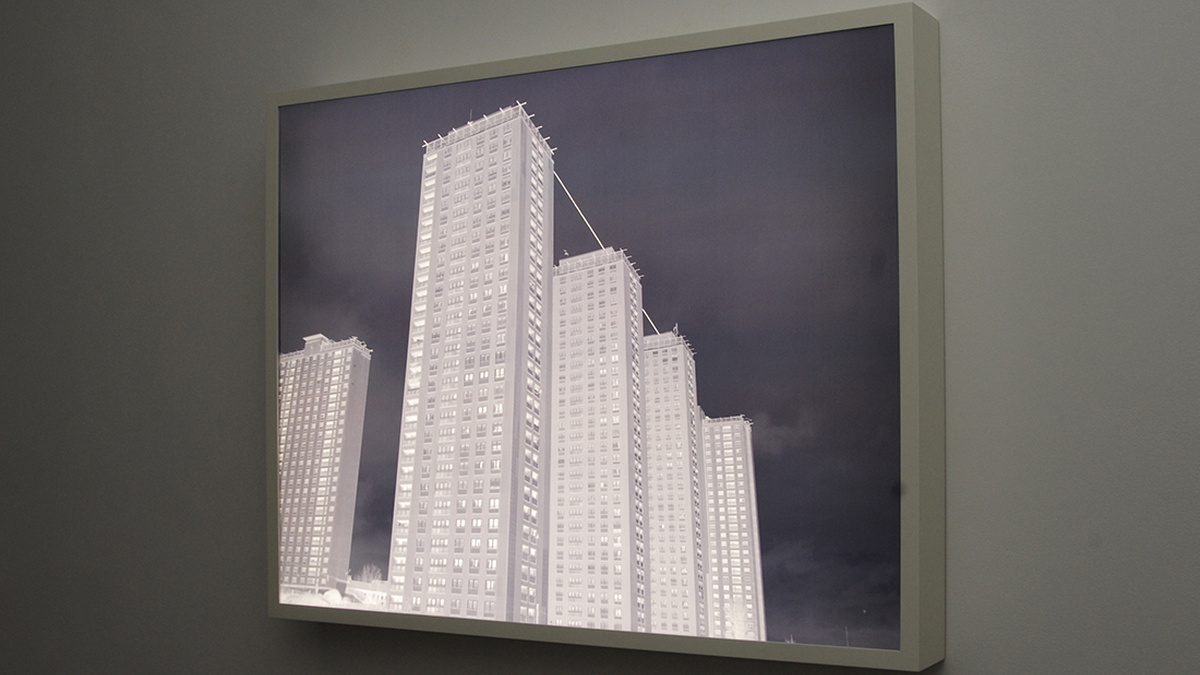 “…the high-wire walker strives to make his audience forget the dangers, to lure it away from thoughts of death by the beauty of what he does on the wire itself. Working under the greatest possible constraints, on a stage no more than an inch across, the high wire walker’s job is to create a sensation of limitless freedom… The desire is at once far-fetched and perfectly natural. And the appeal of it, finally, is its utter uselessness. No art, it seems to me, so clearly emphasizes the deep aesthetic impulse inside us all. Each time we see a man walk on the wire, a part of us is up there with him. Unlike performances in the other arts, the experience of the high wire is direct, unmediated, simple and it requires no explanation whatsoever. The art is the thing in itself, a life in its most naked delineation.” - Paul Auster, “On the High Wire”

Continuing her interest in the psychology of space, and in her relentless pursuit of the vertiginous, Catherine Yass’s work High Wire is conceived as a video installation that explores the drama of a solitary high-wire artist walking a wire stretched between three tower blocks more than ninety metres above the ground. Planned for filming in summer 2007 and for exhibition in 2008, Yass’s new work will explore the relationships between a ‘closed-down’, mental space inhabited by Didier Pasquette – the high-wire artist with whom she is working – the architecture visible beyond him, and the open space through which he moves.
Presented as a multi-screen installation in a darkened space, the central images in High Wire will draw the viewer into the highly focused space inhabited by Pasquette during the walk, through footage derived from a small camera attached to his head. This material will present exactly his point-of-view: what he sees as he steadies himself, picks up his balancing pole and steps from the top of the tower block onto a wire stretching into the distance in front of him. The movement – each step – requires almost unbelievable concentration and focus. This framing of Pasquette’s own perspective places this internal drama at the centre of the installation, alongside material shot from other perspectives and at ground level that imparts the sense of a lone, distant figure, seen against the brutalist tower blocks of Red Roads in Glasgow, and the landscape of the city beyond. An immersive soundtrack will bind these various elements together, overlaying ambient sound from the Glasgow environment and Didier Pasquette’s own intense, and highly rhythmic breathing patterns.
High Wire has a clear relationship to concerns explored in Yass’s previous works, such as Descent (2002). But she continues to push her ideas in this new work, which combines 16mm film and video shot from six different angles and will create for the viewer a complex and layered experience of an extraordinary event and piece of existential drama.

Catherine Yass
Catherine Yass is one of the most innovative artists working with film and photography today. She was nominated for the Turner Prize in 2002 and has recently exhibited her work in Spain, the Netherlands and Japan.
Her short films generate startling new perspectives on the urban environment, filming familiar sights from highly unusual vantage points. Descent (2002) was filmed with an upside down camera lowered from a crane through the morning mist from one of the massive construction sites on Canary Wharf in London. Flight (2004) was made from a remote-controlled helicopter circling the BBC Television Centre in London. Yass has recently filmed the Three Rivers Dam in China.

Didier Pasquette
Didier Pasquette is one of the few great high wire artists working today. Born in France where he studied with Philippe Petit (famous for his high wire walk between the Twin Towers in New York in 1974), Pasquette regularly performs in circus shows, and sometimes undertakes special high wire walks in spectacular environments. In 1997, Pasquette walked with a colleague on a 430 metre wire some 30 metres above the River Thames. To celebrate the Millennium, he walked along a specially rigged high wire running along the Greenwich Meridian in Northern France. In 2005 he walked the length of the pitch on a wire stretched high above the Stade de France in Paris. Red Roads in Glasgow marks a new change of scene for Pasquette, exchanging the beautiful surroundings of tourist landmarks for the gritty realities of a post-war housing estate, its tower blocks conceived as streets in the sky.

Red Roads, Glasgow
When they were built in the late 1960s, the buildings on the Red Roads site were the tallest social housing tower blocks in Europe and were considered one of the boldest architectural visions of its kind in Europe. Symbols of the modernist dream to build a brave new world by reaching into the sky, the blocks afford magnificent views across the city of Glasgow and out over the Clyde estuary. The buildings represent what was at the time considered to be a modern and progressive way to create social housing for the workers of this great industrial city. The complex embodies a particular moment in the history of the European city. The utopian dream may have dissipated and the community has since fragmented. Nonetheless a tangible community remains. It has its own hopes and aspirations just as the planners of Red Roads had theirs some forty years earlier. High Wire will rekindle the feeling of daring and beauty that inspired the original plans for Red Roads and will offer an indelible experience for the residents of immediate area and inhabitants of Glasgow as a whole.

Artangel
Over the past two decades, Artangel has forged a reputation as one of the UK’s leading producers of ground breaking new art experiences. Artangel commissions and produces exceptional projects by living artists. Consistently ambitious and surprising in both idea and scale, they are the kinds of projects that shift expectations and generate excitement wherever they take place. Artangel raises backing from the public and private sectors to enable artists to realize these ambitious public projects, many of which are realised in collaboration with particular communities and in response to specific sites or situations in the UK. Artangel projects achieve high visibility through partnerships with the press and the broadcast media. Artists commissioned by Artangel have gone on to win the Turner Prize four times over the past decade, from Rachel Whiteread in 1993 to Jeremy Deller in 2004.

Artangel Media
Artangel Media is a limited company through which the organisation is able to produce ambitious film projects as well as special programmes for broadcast television. Recent productions have included Mike Figgis’s film of Jeremy Deller’s The Battle of Orgreave, co-commissioned with Channel 4 in 2002 and Giya Kancheli’s requiem for Imber, the village that died for England, which Mark Kidel filmed for the BBC. Artangel Media is currently working on a major new feature length co-production with Channel 4. Written and directed by Penny Woolcock, The Margate Exodus will bring together residents from different communities in the English seaside town of Margate in a contemporary re-telling of the Old Testament Book of Exodus