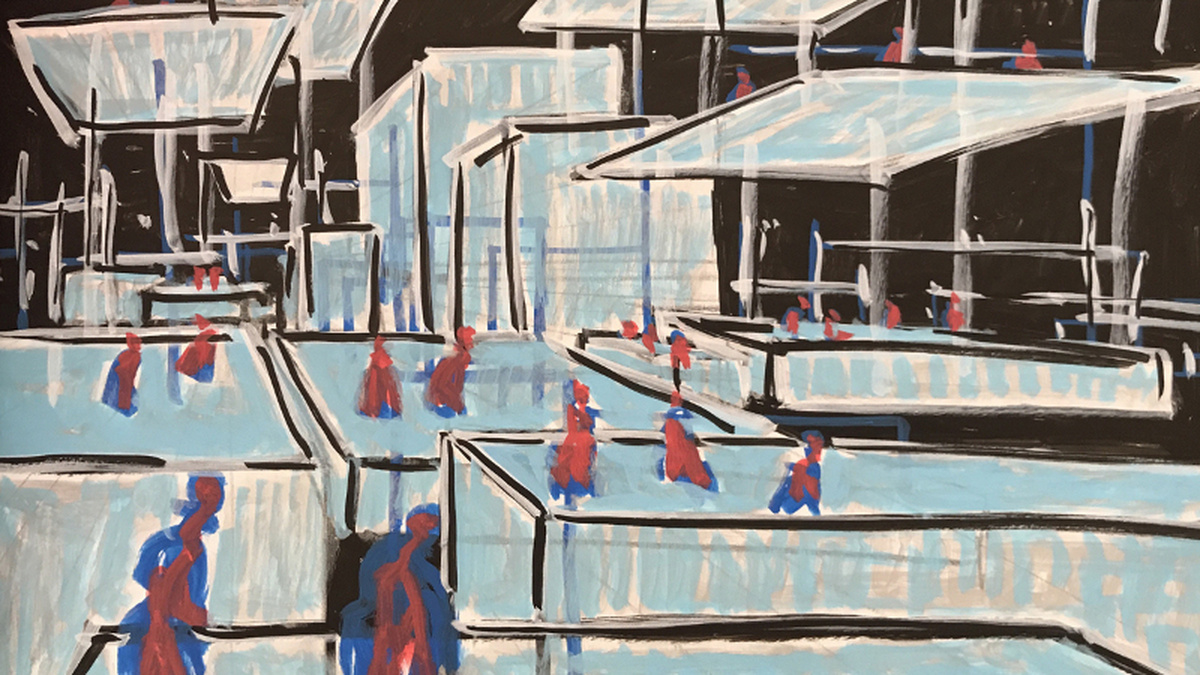 Political Animal is a four-day interdisciplinary event focused on the phenomenon of the Contemporary City.

The Leverhulme International Network of Contemporary Studies (LINCS), together with Glasgow School of Art, the Centre for the Contemporary Arts (CCA) and The Drouth, have invited a collection of international artists, writers, performers, academics, musicians and activists from all over the globe to come together between 21–24 June 2018. CCA’s Public Engagement Curator Viviana Checchia and Professor Johnny Rodger from Glasgow School of Art will draw on existing works and projects and commission new ones from artists who explore the subject of the contemporary city at the core of their practice.

The participants will share their politicised practices and ask how the contemporary city can be written through curating, performing and building. The device of the ‘assembly’ will be a principle vehicle of exploration, with participants responding to questions both as artistic/cultural practitioners and also as citizens:

As such, a question to begin with might be, ‘What are the respective and interrelational roles of the collective and the individual in the operation of the contemporary city?’ Aristotle - one of the foundational philosophical writers on civics - defined the human as the ‘political animal’ because humans rationalise, normalise and codify their social relations in a city (polis). Yet do all ‘civil’ practices participate in the rejection of the unconscious and instinctual urges that form the non-political aggregations of the mob, the pack and the herd? How does the body of the collective absorb and deploy or exclude the living body through art, the law, the word, or the media?

By using the term ‘political animal’ to define the human being, where ‘polis’ is the Greek word for ‘city’ (and the root of our word ‘politics political’ etc) he is saying on a most literal level that the human is an animal who lives in towns or cities. From thence of course one can extrapolate, as thinkers and interpreters of Aristotle have done down through the centuries, and push the interpretation further to argue that Aristotle defined the human as the ‘political animal’ because humans, biologically a species of animal, embody two distinct strata of being – the rational, civil, normalising being and the instinctual, bestial, existential being.

We aim to move critically and artistically towards an exposition of living in the contemporary city from the perspective of those two poles of the human constitution and operate with the contrast, dialogue, movement, play and tension between them. With this in mind, it was decided that as this event also involves participants from different backgrounds, interests and ways of working then the notion of ‘assembly’ would be a useful concept with which to occupy these contrasting modes of political gathering; that of the city civilisation and that of the aggregation of the animal kingdom - the herd, the flock, the pack…

So, from the beginning the themes and tensions mined from that Aristotelian definition – ‘human/animal’ or ‘conceptual/corporeal’ – could be further formulated to ask, ‘Do all ‘civil’ practices participate in the rejection of the unconscious and instinctual urges that form the non-political aggregations of the mob, the pack and the herd? How does the body of the collective absorb and deploy, or exclude the living body through art, the law, the word, the media?’

It is important for Political Animal that the physical setting of the staging of these questions becomes as much a part of the event and the exploration of the theme as the performances and participations. Thus the whole event will be contained in two main arenas: a human assembly and an animal assembly. These will correspond to two physical spaces; one a more political, rational, enlightenment, civil assembly space created by Jonas Staal in the galleries of CCA; and one articulated by Prabhakar Pachpute in the GSA galleries as a more bestial, existential, instinctual area.

While Jonas Staal will be presenting on this occasion the final outcome of a long term project developed in collaboration with the CCA Public Engagement Programme, Prabhakar Pachpute will launch a new series of work produced for this event and commissioned by GSA, CCA and The Drouth to accompany the publishing of the book ‘Political Animal’. The exhibition will present ten framed A3 drawings, a series of wall interventions (murals, stencil etc) as well as various 3D objects. The work Prabhakar will produce will be conceptually based on Johnny Rodger’s writing and site-responsive to Glasgow and the GSA gallery.

The animal theme, besides its role in the Aristotelian definition, also has a long history of exploitation and development as an allegorical rationalisation and codification of social behaviour through the literary form of the fable. The thinking here is, of course, of the European tradition of Aesop and La Fontaine, and this is said to come down to us from the even older Indian tradition of the Panchatantra. Johnny Rodger’s research into the Contemporary and what it means go back to his publication of ‘Contemporary Glasgow’ in 1999. But alongside a sustained scholarly and analytical approach to the question, for the past few years he had been using the form of the modern prose poem fable in order to come at the question of the ‘contemporary’ through the very different angle of literary form. He now has a collection of twenty of these modern fables – some of which have been published individually in The Drouth.

There will be various forms of engagement – conference / performances / exhibitions – all contained in two main arenas: a human assembly and an animal assembly. However, instead of the usual closing remarks, the end of this event will take the shape of a BarCamp. BarCamp is an open, participatory workshop-event, the content of which is provided by the participants themselves. It is an intense event with discussion and interaction between attendees. Unlike the traditional conference format, BarCamps have a self-organising character, relying on the passion and the responsibility of the participants.

We are looking for proposals from anyone who would like to attend the event and make use of the BarCamp. This could be a talk, a workshops or simply a paper to be made available during Political Animal. Any public activity led by individuals or groups who would like to contribute to address the general public or communities would be welcome and supported by Political Animal within the limitation of our resources and financial capabilities. Please send proposals consisting of 250 words to politicalanimal2018@gmail.com by 15 March 2018.

The event is free, open to all, and the itinerary is as follows:

Tickets for 21 + 22 June can be booked via the link. Lunch and refreshments are also available, as a ticketed option, for £15 per day. If you require accommodation during your visit, this is available for £264 per three nights and can be arranged through the Political Animal team, via email at politicalanimal2018@gmail.com.

The main supporters of the event are the Leverhulme International Network of Contemporary Studies, Glasgow School of Art, the Centre for the Contemporary Arts, the Scottish Graduate School for the Arts and Humanities and The Drouth journal. CCA’s public engagement programme is supported by the Esmée Fairbairn Foundation.