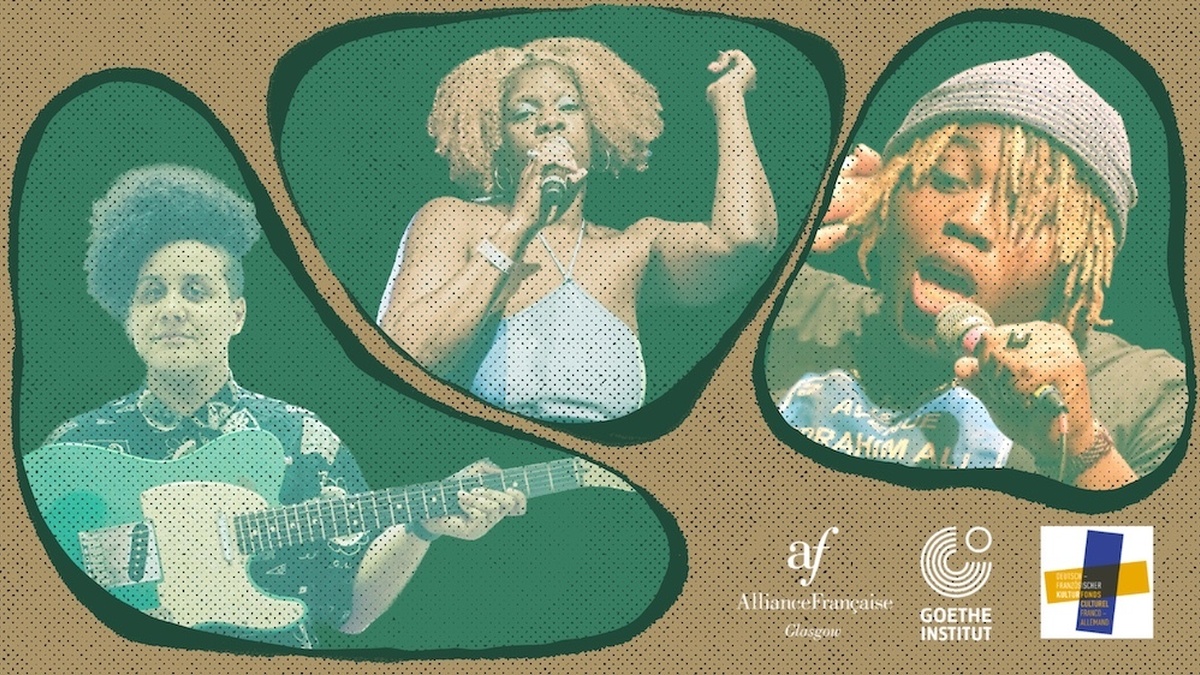 Three artists from Germany, France and Scotland will take part in a three-month online residency between mid-July and mid-November 2022. During this time, the artists will explore the theme of postcolonial patterns in music in the context of gender gaps with their subjective perception and with regard to their own identity and realise it musically.

Following their online encounters, the three artists, Rachel Aggs, Jesseline Sarkodie Preach and Erika Momo Nomeni (Dj Waka) will meet in Glasgow on 24 November 2022, where they will present the results of their work in a concert.

The concert will be preceded by a panel discussion on intersectionality in music with the artists and other speakers.

Rapper, beatmaker and DJ, ERIKA MOMO NOMENI (DJ WAKA) was born in Cameroon and arrived in France at the age of 8. She grew up between Paris and Ile-de-France before settling in Marseille in 2016. She also organises festivals, and has notably organised Queer Hip-Hop and Afro-Sound nights, such as Ze Gaitto. She is mainly inspired by black music from West and Central Africa, passing through the South with Amapiano, and her style reflects her hip-hop influences. She defines herself as an Afrofuturist artist whose musical influences express a form of Afro-Fusion. She works in a local radio station in Marseille where she produces programmes to make access to the cultural scene easier for those who are the most distant (minority artists, women, LGBTQIA+, racialized people...)

RACHEL AGGS is a multi instrumentalist and songwriter based in Glasgow. Aggs, a prolific specialist in euphoric post-punk, has achieved international acclaim with collaborative touring projects Trash Kit, Shopping and Sacred Paws. Creating zines and co-ordinating workshops that encourage women, non-binary people, and people of colour to form bands, Aggs has galvanised the DIY scene in the UK. Aggs released a solo album on Lost Map records as part of their Visitations residency in 2019 and self released //Tape 1// in 2020. Both releases showcase Aggs’ signature hybrid post-punk/highlife inspirations stripped down to new minimal extremes. Pulsating, electronic beats, coolly-recited lyrical mantras and spindly guitar lines abound in this life affirming music that speaks directly to your heart.

JESSELINE SARKODIE PREACH is a freelance artist and performer from Hamburg, born in Ghana. Since 2013, she has regularly performed with the independent theatre groups: Gintersdorfer/Klaßen, God's Entertainment, Schwabinggrad Ballet and La Fleur on European stages (among others HAU Berlin, Kampnagel Hamburg, Kaserne Basel, Theater Bremen). In 2017, she launched her music career under the artist name PREACH. She is a co-founder of the Hamburg-based DIY music collective "One Mother", which won the Hamburg Music Award in the category "Newcomer" in 2019 category. The collective hosts the regular concert and party series "Global Feminist Bad(b)ass". Feminist Bad(b)ass" in cooperation with Kampnagel Hamburg, which presents local and local and international hip hop and R'n'B artists with an intersectional feminist feminist claim. PREACH has made a name for itself in the local and German-language music scene in recent years. music scene in recent years: Her singles have been featured by MISSY Magazine and DAS WETTER, among others. In autumn 2018, her EP "soft & cuntig" was released. In autumn 2020, she released her first album "Likör" on the Austrian independent label Problembär Records. In 2020, the freelance artist commissioned a work for Popkultur Berlin the work. "FATHOEBURGER", which, due to the current situation, was created as an online work and is therefore still available. With FATHOEBURGER was also Jesseline's first self-produced album. "Medium Rare", which she released together with the label of the Hamburg cult club "Golden Pudel". In the same year she produced the live audio book "The Story behind a Story" for the Gessneralle in Zurich.