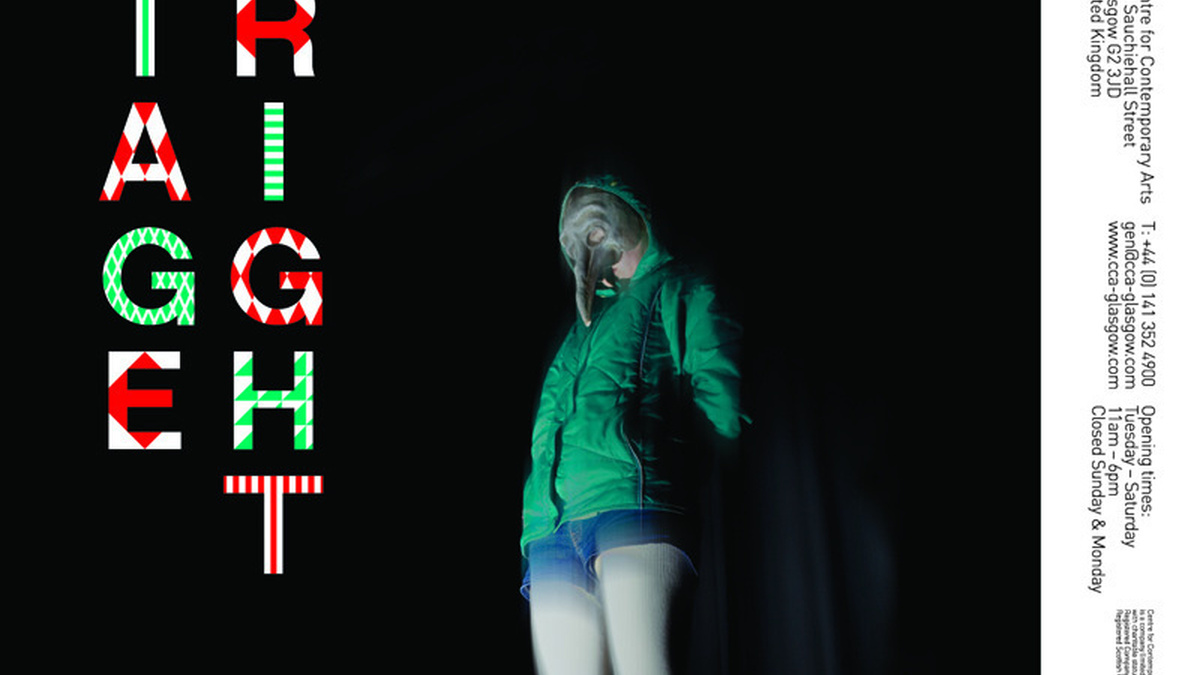 In this exhibition, artists, playwrights, set designers and producers come together to explore the meaning of theatricality in their different fields. Within the visual arts the term ‘theatrical’ has often been used to denigrate an artwork – it can suggest a lack of ‘authenticity’. In the theatre world, ‘theatricality’ is viewed as a more positive agent – it creates a mental space where the imagination is freed and anything is possible. More recently there has been a noticeable trend to rethink the idea of the theatrical in the visual arts. Many artists have embraced the potential of theatre, acting and set design while recognising the broader cultural environment in which we all appear to be acting, whether at work or at play. Re-enactments of older performance works abound and theorists discuss our increasing impulse to re-enact the media narratives that surround us.

In Stage Fright each artist has produced work that tests the idea of theatricality within the framework of an art gallery, where emphasis is often placed as much on the power and aura of the object as on the ideas at play in an exhibition. Performers have a presence in the exhibition – particularly in Dan Rebellato’s work. Patrick Macklin explores the relationship between virtual reality and theatricality, and the process of writing itself is dramatised by David Greig. Most of the works compel visitors to the exhibition to reassess their own position within this situation. Often in Stage Fright, it is not enough to observe – you are made aware of your own performance within the scenario or you find yourself implicated in the work itself.

In Graham Eatough’s, Stage Door and Performance in Progress, this experience is made explicit. From the moment visitors enter CCA, they find themselves simultaneously in the backstage area of a theatre and in the foyer of an arts centre. Props, make-up tables and green room facilities jostle for space with the reception desk and bookshop. A stage hand is ready to usher you through curtains where you find a café, or perhaps a stage set for a café given that the next set – a forest – is suspended above, waiting to descend. The work confirms Eatough’s faith in the transformative power of theatricality and its capacity to create imaginative alternatives to reality.

In the main gallery space, Luke Collins presents a performance archive, the results of a rehearsal period in which he works from two chapters of the controversial novel, Dirty Weekend (1991) by Helen Zahavi. The novel has elements of the carnivalesque in its dark inversion of male violence, as the heroine enacts a series of brutal murders on male victims in Brighton. Collins too adopts a carnivalesque mode, flipping the genders of Zahavi’s characters in his performance.

Collins is responding to the reflexivity and self consciousness or awareness that is suggested in the loose theme and title of the exhibition. Describing this context he says “It is a question of being both inside and outside an experience. Of occupying a between space which fluctuates between absorption in the moment and a conceptual view of that moment. This fluctuation becomes an edit point.”

Nearby in the same space, Dan Rebellato confronts us with a caged actor, trapped in the sisyphean task of repeating a text throughout the entire day. Not only has the actor to repeat the text, but each time they must incorporate one difference from the previous performance. Devising the work, Rebellato found that this task truly tested the performers’ stamina and that the act of repetition revealed a rapidly changing interpretation of the text itself:

“What is interesting is how the text very quickly changes from something acted to something repeated. This means that the way of heightening it is to make the texts the kind of things that need to be spontaneous: intensely emotional pieces, jokes, confessions, and so on. I wrote a short piece in which a woman is imploring a passer-by to help because she had a crash and her daughter is trapped inside the car. It was extremely eerie to hear it only 10 minutes in when it’s already become emotionally lifeless and has moments of laughter and hesitation in it. Very quickly radical differences become apparent between performer and text, word and emotion, sense and action.”

In Gallery 3 David Greig also considers the relationship between performer and text, from the writer’s perspective in The Moment When. The title of the work refers to one of the techniques he uses to prompt the development of scenes when he’s writing. What happens in the moment when…?

Conscious of the dead time, anxieties and longueurs involved in the acting of creative writing, Greig has documented this process faithfully and then given this script to a performer to replicate in real time. The work, then, starkly reveals the gap between the act of creation and the final presentation of a text. It also theatricalises the process of writing and places David Greig in front of an audience, putting into question the authenticity of the writing process as it submits to the scrutiny of a camera and the public.

Two other works in that space echo the stage set trees and blacks of Graham Eatough’s work. Jonny Dawe and Nick Powell’s Automatic Scene Changer raises and lowers painted drops in front of a door embedded in the gallery wall. The mechanism is uneven in its rhythm, unpredictable as it moves out of phase, then pauses and begins again. It functions as a kinetic sculpture while at the same time drawing attentions to its levels of illusion from the fake door to the final curtain. The work’s frames also remind us of the same allusions that are at play in the history of art within the frame of painting and in the evolution of perspective.

Across the gallery, Patrick Macklin’s www.treegrid.co.uk searches for the stage in the digital realm. Recalling Shakespeare’s comment that ‘all the world’s a stage’, a website links to satellite images of the globe and presents visitors with a grid in which they can plant trees. The results of these actions are then projected onto the nearby wall.

If, at first, a website and digital image seem distant from theatricality, Macklin reminds us of just how potent the internet is in stimulating our desire to escape from our daily identities and the tyranny of realism. From chat rooms and mailing lists through to Second Life, we enact other selves while a shadow economy in digital artefacts thrives online. The digital image, with its inherent ability to morph and mutate, allows us to play within the stage of virtual reality.

Patrick Macklin’s work also offers us a choice – to interact or to observe more passively. These options are also central to Beat Your Block by Sharon Smith and Felicity Croydon. They ask visitors to their work to consider themselves as actors playing characters within the situation they have created. That could mean actually following the short exercise course on the video, or simply to relax in the room or observe others. Behind this lies Smith and Croydon’s interest in ‘the politics of presence in the performance act’. Their work aims to foreground the presence of the viewer as much as the performer, confusing and radicalising the boundaries that traditionally exist between these participants. Describing the way in which they approached Stage Fright, they say:

“Beat Your Block has been made specifically for this room at the CCA in response to its history as a resource room, tailored to its perimeters and to the exhibition title. We have built an environment with a function that offers an active and contemplative space. “We have created a clean, calm, uncluttered space – like a day room, relaxed and vaguely clinical. Upon entering, shoes must be removed. A visitor might sit on the bench or anywhere on the soft flooring. Their presence in the room is framed by the sentences ‘You already have most of the skills it takes to be an actor. Your character has been created to do a specific job within the scheme of things’. In the 1920’s German theatre theorist Max Herrmann wrote that “the original meaning of theatre was derived from the fact that it was a social game – played by all for all. A game in which everyone is a player – participants and spectators.””