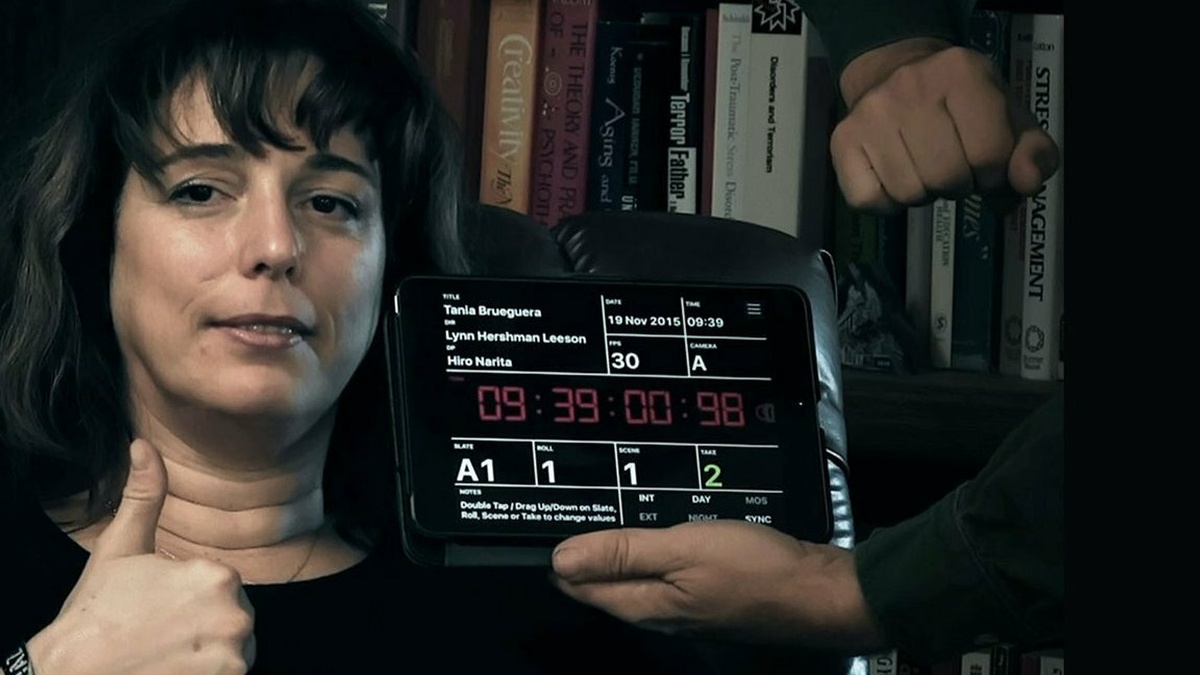 Tania Libre is a film by Lynn Hershman Leeson centered around renowned artist Tania Bruguera and her experience as a political artist and activist under the repressive government of her native Cuba.

The film begins with the voice of Tilda Swinton narrating a manifesto of artists’ rights written by Bruguera in which she expresses her views on art, our universal right to both enjoy and create art, and the duty that artists have to dissent. The film then captures a series of therapy sessions between Bruguera and Dr. Frank M. Ochberg—the founding father of trauma therapy, particularly PTSD and Stockholm Syndrome—where Bruguera describes with great candor and earnestness several traumatic experiences such as the betrayal by her father who handed her to Cuban secret service, and her imprisonment in Havana years later after advocating for freedom of expression. Their conversations expose an intimate yet profound analysis of Cuba, surveillance and the politics of repression embedded in government and family structures.

Lynn Hershman Leeson is an artist and filmmaker internationally renowned for her pioneering use of new technologies that explore key social issues. Her prolific body of work spans over four decades: from her early conceptual and performance works where she constructed an ‘official’ civilian record for her alter ego Roberta Breitmore, to her more recent works that intersect with the field of science to explore themes of identity, privacy, surveillance and the complex relationship between humans and technology, and the real and the virtual world. Hershman Leeson also addresses these key themes through her filmmaking, which is highly idiosyncratic and socially engaged. A notable example is her acclaimed documentary ! Women Art Revolution, which focuses on the Feminist movement in the USA.

Tania Bruguera is a Cuban artist and activist living between New York and Havana. She has participated in numerous international exhibitions and her work is in the permanent collections of many institutions, including the Museum of Modern Art and Bronx Museum of the Arts and the Museo Nacional de Bellas Artes de La Habana. Bruguera's work pivots around issues of power and control, and several of her works interrogate and re-present events in Cuban history. As a result of her art actions and activism, Bruguera has been arrested and jailed several times.

This event is part of School of Abolition; a year-long action research project developed and led by artist and curator Thomas Abercromby using contemporary art and activism to challenge Scotland's prison industrial complex and the ways in which we respond to harm and crime without resorting to further policing or imprisonment. Thomas has invited various artists, academics, writers, activists and other guest contributors to expand the sharing of abolition praxis as a way of reimagining our criminal justice system through a free public programme of readings, workshops, screenings and public art displays. The School will work in close collaboration with communities in Glasgow North, providing a support structure that recontextualises the very idea of policing and prisons towards community-based models of safety, support and prevention.

We encourage all participants to do a lateral flow test before attending the session. Lateral flow tests can be picked up for free at your local pharmacy or you can also order them online to be delivered to your door by visiting; this link.

For access queries and support to cover childcare, travel for those on low incomes and additional disability support available please email kirsty@glasgowsculpturestudios.org

Part of School of Abolition