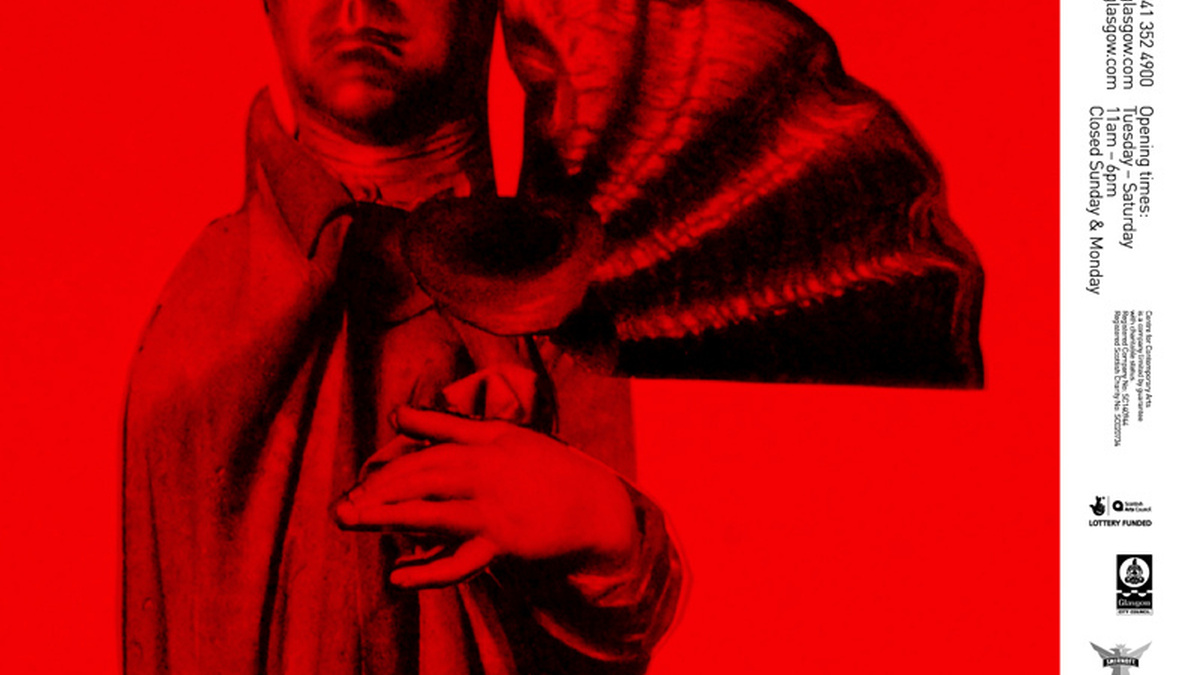 “Erotic play discloses a nameless world which is revealed by the nocturnal language of lovers. Such language is not written down. It is whispered into the ear at night in a hoarse voice. At dawn it is forgotten. Repudiating the virtues of your world, criminals hopelessly agree to organize a forbidden universe. They agree to live in it. The air there is nauseating: they can breathe it. But – criminals are remote from you – as in love, they turn away and turn me away from the world and its laws. Theirs smells of sweat, sperm and blood. In short, to my body and my thirsty soul it offers devotion.”

The Dirty Hands brings together two distinct bodies of work by Alex Pollard and Clare Stephenson. The galleries at the CCA are jointly conceived by the artists as a theatrical space of presentation, with paintings, collages and floor-based objects directing a sensibility of both period flamboyance and aestheticised degradation. Within this collusion of artworks lies a collection of figures; anti-heroes drawn from historical myth and literature unified by a revelry in elegant amorality; highwaymen, petty thieves, hoodlums, bums, and drag queens rendered in sublime vortices of paint or delicately collaged prints of baroque stone carvings. Pollard and Stephenson approach art making through the appropriation and simulation of stylistic or methodological codes, whilst equally drawing imagery from a ritualised world of decadence and criminality and the paradoxical celebration of ‘the rock bottom’ as a source of perverted power. Rooted in Jean Genet’s existentialist philosophy of the street, and the inverted argot of a historical underclass, The Dirty Hands becomes an expression of a “nocturnal language”, a sequence of gestures and postures that suggest alternative economies, moralities, and communication.

Whilst utilising ‘traditional’ media such as painting, bronze casting, drawing and collage, both artists have previously developed techniques in their practices that subtly shift our reading of ‘conventional’ figuration. In many senses these processes convey an arch self-consciousness; a staggering and bastardisation of moments of representation through detailed forms of simulacra, or the staged revelation or concealment of the artist’s hand. This layered vocabulary of reconstituted illusion – of plundered and dislocated source material embellished through repeated aesthetic and structural twists – lies at the heart of The Dirty Hands, both in the methods of production that Pollard and Stephenson individually adopt, and in the caricatures they summon up.

Within the first gallery at the CCA one is confronted with a darkened space, the walls painted a brooding grey. This oppressive atmosphere is heightened by several of Pollard’s paintings, hung on the walls and also stood on the floor as two-sided tondos. Rendered through monochromatic filters, these works convey a sense of a filmic hallucination; their delirious vortices and red washes conjuring the mood of Kenneth Anger’s occultist rituals. At the centre of all these paintings is the same distorted image; that of the notorious 18th century thief Jack Sheppard, in chains and awaiting execution as depicted in a painting by his contemporary James Thornhill. In this image Sheppard’s rounded features and cropped prison hair give the impression of a young child, and he is shown pointing outside of the painting as if to imply escape and freedom. Indeed the thief became a cause célèbre despite his criminality; a working class hero lauded for his almost supernatural ability to escape the clutches of the ruling classes.

Used by Pollard as a repeated motif, Sheppard’s fey gesture and characteristic face are warped, repeated and overlain in flattened compositions that imply the slippery, liquid surface of a carnival hall of mirrors. In relation to Thornhill’s original caricature - the mythologizing of the criminal as an enigmatic dandy - this suggestion of a reproductive manipulation, the measured disintegration and reformation of the image, follows the distortions and echoes of that myth toward a grotesque mantra. Both Sheppard and his image stand as perverse symbols of transcendence - through the man’s ability to escape physical incarceration, and in his aestheticised and constantly rearticulated presence within popular consciousness.

Joining these paintings in the darkened gallery are four free-standing screens by Stephenson that structure and divide the space, restricting the viewers gaze across the room. Formed from horizontal white slats, these ‘blinds’ bear a printed image of a figure; a collaged amalgam of marble filigree and over blown Benday dots arranged to represent an insouciant, poised drag queen. On some of the screens the image is scrambled, the slats rearranged as if in a puzzle, whilst in one the horizontal sections are tilted, the figure disappearing as the blind is opened. Reminiscent of the horizontality of Stephenson’s recent series of ovoid wooden ‘bandaged heads’ and the striped platforms that feature regularly in her drawings, these fractured planes act to serialise the flux between the flat printed image and the assimilation of sculpted density that forms the impression of a rounded figure. Within the gloom of the grey space and alongside Pollard’s distorted visions, the repeated and reconfigured pomp of this figure – audaciously named Our-Lady-of-the-Conscious-Optics – pronounces both darkness, and the metaphorical casting of light through the opened blind.

In the second larger gallery at the CCA, Stephenson shows a group of small paper collages of similar figures, alongside a diorama of statuesque freestanding cut-outs. The stages of production are made clear here; the smaller works are formed through carefully dissected sections of xeroxed images, all of which show baroque or medieval ornament – the carved filigree of religious facades and marble sculpture – whilst the larger than life figurines relate directly to these collages; figures from the same troupe scaled up as screenprints directly applied to cut-out wooden supports. This pointedly facile progression through the perversion of the sculptural – from the elaborate three-dimensionality of the pious baroque carving, to its flattened, tonal image, to its faux return to ‘sculpture’ as a prop-like object – is elaborated by Stephenson through her placement of the two-dimensional statues within a rudimentary theatrical arrangement. Her multi-layered ‘stage’ is populated by seven figures in various aloof stances or postures of recline.

The varyingly intricate and simple acts of collage affected in these works produce a curious conversion of the sublime and the religious, to the vain and decadent. Blocks of rapturous fabric hanging in dense folds intertwined with cherubs, become features in a carefully constructed early twentieth century couture. The delicately carved hands of saints or angels become affected, camp gestures. The eccentricity and excessiveness of these costumes, and the attendant statuesque posing of these figures, implies parading drag queens, and this transformation is made explicit in the titling of the works. Stephenson names these characters with reference to Jean Genet’s 1943 novel Our Lady of the Flowers, a book populated by transvestite characters whose Absolutist terminology is appropriated and combined with an existential twist in titles such as Miss Verily-Existent and She-who-is-the-Unguarded-Moment. In relation to the material processes of production followed by the artist, the self-consciousness of camp theatricality and the inherent awareness of excessive failure within the simulations of drag, distils a delight in that which is beyond utility. The notion of an affected and needless gesture as the basis for a fresh vocabulary, asserts value within that which is unqualified and materially ‘decadent’.

Accompanying Stephenson’s tableau in the second gallery are a series of paintings by Pollard depicting the outlaw Robin Hood, and archetypal Dickensian thieves and scallywags. These works stylistically mimic the fantastical paintings of nineteenth century artist Richard Dadd echoing the manner in which Dadd’s scenic arrangement of figures and the general flatness of his compositions create an initially abstract and unreadable mélange. However, Pollard’s visions extend this abstraction, the crystalline surface of the Jack Sheppard paintings extrapolated through the scale and density of repetition, distortion, and constant shifts in orientation. In the triptych Dandy Outlaws Gesturing in a Forest the eponymous characters appear as multiple morphing reproductions of the same generic ‘outlaw’, his oblique gesture repeated absurdly as an often disembodied and ritualistic declaration. The painting exists as an excessive theatre of intricate alchemical disruptions of figuration; magnified and controlled expressions that exist themselves as forms of dandified posturing. This structural and fictional posing is evidenced in further paintings’ references to Dickensian street life; depictions of loitering young men and dogs emphasising elegant stances and couture. Within these louche scenes lies a choreography of criminality – the delicate movements of the pickpocket, the gestural grammar of a thieves lexicon, or the concealed subterfuge of street polari. Runic symbols populate these dissolute exchanges; cryptic typologies that suggest an underworld language of graffiti. These markings are also crudely moulded onto the surfaces of three standing coins; unwieldy cast discs positioned as totems on the gallery floor. Drawn from the detourned currency of American hobos, where the nickel is carved and customised to become a distorted point of exchange, Pollard’s theatrically oversized sculptures are grotesque monuments to an illegal tender. Cast in dense black rubber these visceral fetishes of a vagabond’s argot pronounce the social position of ‘rock bottom’ as a source of perverted pleasure.

Jean Genet’s Our Lady of the Flowers is described by Jean Paul Sartre as ‘the epic of masturbation’. Written from prison - where the author spent much of his life serving time for theft - Genet narrates the wider fiction as the product of his circumstances, describing the writing of the novel as a means to amuse himself, and the explicitly sexual stories as a focus for his onanism. Indeed in much of his writing Genet claimed to seek out imprisonment in order to achieve this state of pleasure, a reversal of values that is carried into his narratives, where death is accompanied by ecstasy, and murder an act of sexual appeal. For both Stephenson and Pollard this transvaluation - the erotic celebration of power gained through a state of submissiveness or moral poverty - provides a crucial symbolism in the consideration of art making. Visual and material excess is experienced in their work through both fantastical fictions, and the detournement of artistic process as a form of dandified gesture or “nocturnal language”. The appropriation of finessed nineteenth century English painting or baroque carving is presented as elegant thievery, a reframing of postmodern strategy through the camp argots of fugitive yet excessive gesture and inverted morality. In pointed response to the political rhetoric of contemporary art, The Dirty Hands renders through sublime visions and profane reproduction the ‘accursed share’; a necessary, libidinal space of non-commitment, and an articulation of production delightfully soiled in its excesses.